Earlier this week, a few of my colleagues and I were invited to a press tour at Lucasfilm headquarters. There were a variety of exhibits up, for a variety of news reporters. Some were directed towards their toy/merchandising area, I was directed to their television area, and a select few reporters got to go to the Episode VII press preview. While I don't have info on the latter, I do have some news on the television front. They had a big diagram up in the room, which I have a picture of here: 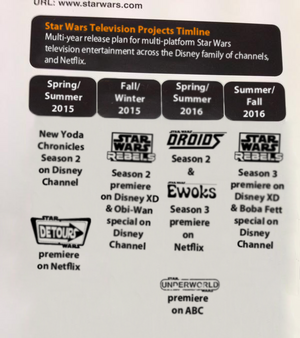 For early 2015, it they intend to release the 40-episode first season of Star Wars Detours on Netflix. For those who don't know, this is a parody show George Lucas put into production at Lucasfilm Animation before he sold the company. They got 40 episodes finished in 2012, but after Lucas sold his company, the show's production was halted. I guess they're finally releasing it. The Yoda Chronicles are also returning, probably for May the 4th 2015 weekend on Disney Channel, much like the one this year.

In fall 2015 we see Season 2 of Rebels. Lucasfilm says that they expect Rebels to be long running. Maybe as long or longer than Clone Wars. At each season premiere, there will be a special hour-long episode airing on Disney Channel featuring a prominent movie character. For 2015 it is Obi-Wan Kenobi.

2016 is where things get interesting. I haven't heard of these shows before, but Lucasfilm has contracted Disney Television Animation to make new seasons of Star Wars Droids, and Star Wars Ewoks exclusively for Netflix.

Also, Star Wars Underworld, a live-action TV show will be premiering on ABC around this time. It'd be midseason on the 2015-2016 broadcast season around then, so I'd guess it'll be a 7-13 episode first season.

In the fall, Rebels Season 3, with a Boba Fett special. It seems interesting how far planned out they are for Rebels, I wonder if production on the show i farther along than they're letting on...

So what do you guys think about these developments?

(edited by Mr. Ice Christmas)
Star WarsStar Wars Rebels
No replies yet. Be the first!