Аттина (англ. Attina) is a princess of Atlantica, and the first born daughter of King Triton and Queen Athena. Her age causes her to feel a certain sense of responsibility for her sisters. She is described by her sisters in that film as being bossy, but ironically, she herself is often bossed around when her siblings outvote her. In the books, she is a bookworm and has a pet catfish named Fin-Fin.

She has been voiced by an unknown actress in the original film, Kath Soucie in the TV series, Kari Wahlgren in Ariel's Beginning, and Christie Houser in Kingdom Hearts II. 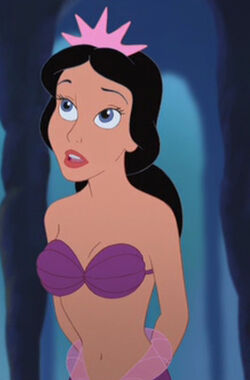 Alana is the second born princess of Atlantica depending on which source material is used. Her hair decoration is similar to a crown, and like Attina's and Triton's, has five points, although in a different style, representing that she is currently next in line to the throne after Attina. She appears to be the one who is most interested in beauty and health. She speaks of her looks often, but she is, by no means, selfish or vain.

Adella is the third daughter of King Triton and Queen Athena. In the prequel film, she is boy-crazy and wishes to dance with, and later kiss a boy. For some reason, she has also gone through a transformation in her life; in her early years, she was shapely and thin. After her father reinstated music, she gained a little weight, as seen in the TV series. However, in the sequel film, she appears to have lost the weight she gained. In the prequel, she states she is 2 years older than Ariel, putting her birth order at odds with this statement. In the end of Ariel's Beginning, she got to kiss a merboy she liked named Stevie.

She has been voiced by Sherry Lynn in the original film, Kath Soucie in the TV series, and Tara Strong in Ariel's Beginning. 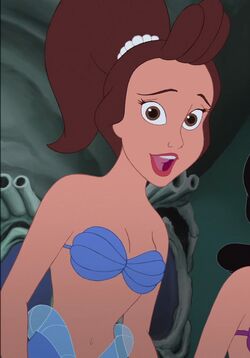 Aquata is the fourth daughter of King Triton and Queen Athena. She is the most obsessive-compulsive of her sisters; when Arista borrowed her things, including her hairbrush, her "lucky" seashells, her pillow, and her stuffed seahorse, Mr. Fuzzyfinkle, she displayed frustration and some hostility, and an impulse to get her things back immediately. She isn't a good dancer, even saying herself that she looks "like a spastic piece of kelp." Her sisters encourage her to dance anyway, and she grows more confident (but not any better at dancing), even starting a conga line at the end of Ariel's Beginning. The original comics denote her as the oldest sister, as she mentions being nervous about becoming queen.

She is voiced by an unknown actress in the original film, Mona Marshall in the TV series, and Grey DeLisle in Ariel's Beginning. 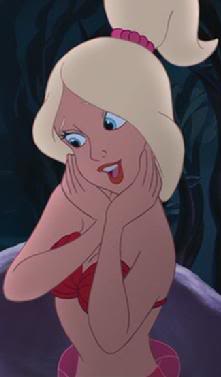 Arista is the fifth daughter of King Triton and Queen Athena. She wears her hair in a ponytail similar to Aquata's, although their bangs are different. She tends to take a lot of Aquata's things in Ariel's Beginning. In her television appearances, she tended to be jealous of Ariel's adventurous ways and joined her youngest sister on adventures. Based on the prequel film Ariel's Beginning, she is the most energetic one, though she adopts a more by-the-rules personality, by the time of the TV series, as shown in the episodes "Against the Tide" and "Beached". Although, in the latter, a small bit of her energetic side surfaces again to help Ariel stop thieves from robbing the Royal Treasury.

She is voiced by Kimmy Robertson in the original film, Mary Kay Bergman in the TV series, and Grey DeLisle in Ariel's Beginning. 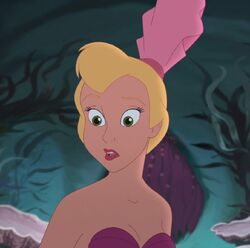 Andrina is the sixth daughter of King Triton and Queen Athena based on differing source materials. She appears to be the joker of her sisters, as seen by her many jokes in the prequel film.

She is voiced by Kimmy Robertson in the original film, Catherine Cavadini in the TV series, Tara Strong in Ariel's Beginning, and Susan Steven Logan in Kingdom Hearts II.

Ariel is the seventh daughter of King Triton and Queen Athena. She is adventurous and curious, especially about human things. She also enjoys music and singing, but can sometimes forget about responsibilities she has. She can also be easily distracted. She is the only princess of Atlantica to not have any specific hair accessory. She is the youngest one and the first to become a mother in her later years after being married to her prince.