"All in the Golden Afternoon"

"The Unbirthday Song"
'Twas Brilig is a short song featured in the 1951 Disney feature film, Alice in Wonderland, it is sung by the Cheshire Cat.

The song's lyrics are actually the first stanza of the Jabberwocky poem by Lewis Carroll, from the book Through the Looking-Glass (an early rendition of Alice in Wonderland).

Meaning behind the lyrics

The meaning behind each word was discussed within the novel Through the Looking-Glass by the character Humpty Dumpty. Each word was described as such:

In the movie, Mome Raths are depicted as small colorful little creatures. 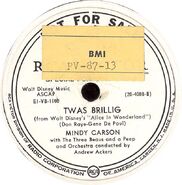