Disney Wiki
Register
Don't have an account?
Sign In
Advertisement
in: 101 Dalmatians, TV series based on films, Animated television series,
and 8 more
English

I Got My Pups With Me

101 Dalmatian Street is a Canadian/British Disney Channel animated series, based loosely on the 1961 movie One Hundred and One Dalmatians.

101 Dalmatian Street is inspired by Dodie Smith's 1956 novel and Walt Disney's 1961 One Hundred and One Dalmatians, but it has been updated and moved to contemporary London. It depicts the adventures of the eldest Dalmatian siblings Dylan and Dolly, parents Doug and Delilah, and 97 younger puppies, all with names beginning with "D", who live all by themselves at the titular address. It is produced by London's Passion Animation Studios, written by Maria O'Loughlin, and directed by Miklos Weigert.[1]

There is to be a total of 52 episodes, and each will run for ten minutes.[2] The show was originally scheduled for release in fall 2018, but was delayed to 2019. The show did get a sneak peek preview on December 14, 2018, with the episode "Dog's Best Friend", "Boom Night", and "Merry Pups" on Disney Channel UK, Europe, Middle East, and Africa.

The official premiere of the show was on March 18 in the UK and France, while airing on March 25 for other areas of Europe, and April 1 in Africa, with Latin America and Brazil in June.

In June 2021, a representative of Disney Television Animation News reached out to the producers during Annecy 2021 and announced that Disney cancelled the series after one season due to low ratings in North America.[6] This was also confirmed by series director Miklós Weigert, who had no plans in doing a second season.[7]

During the Annecy Film Festival in 2018, details about the story of the show were announced. In modern day, the Twilight Bark has become a worldwide barking chain called the "World Wide Woof", and an American Dalmatian named Doug moves to London to become a fire dog, before meeting and marrying Delilah, a British Dalmatian who works as a nurse dog in a London hospital and is also one of the descendants of Pongo and Perdita.

The Dalmatian family live by themselves in a house in London, as their human owner is rich and lives on an island. Said human owner is said to be named after Dodie Smith. The home is full of wacky inventions to make the dogs' lives easier, and they can order whatever they need, with a running joke at how the house is a nightmare for the mailman.[8]

The two Dalmatians both have their own litter of fifteen puppies from previous marriages, with their combined litters, another litter of fifteen, and adoptions from strays or shelters adding up to 99 puppies.

Some of these puppies include:

Outside the Dalmatians, there are supporting characters:

The show's initial antagonist was Hunter but the episode "London, We Have a Problem" reveals that Hunter is working for his great-aunt: Cruella De Vil, who returns as the main antagonist for the Season One climax multi-parter. 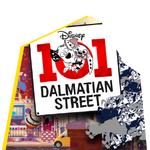 Sid the Squirrel and Dylan

The Triple-Ds
Diesel Be Prepared.png
Diesel poses in a parody of "Be Prepared" 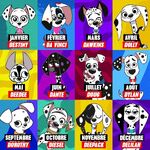 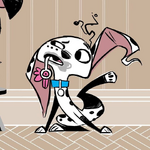 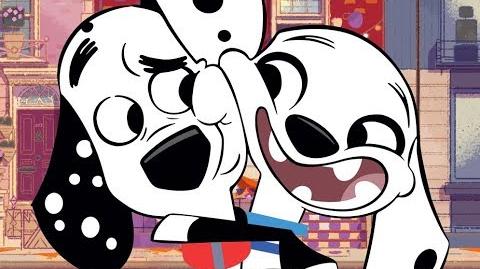 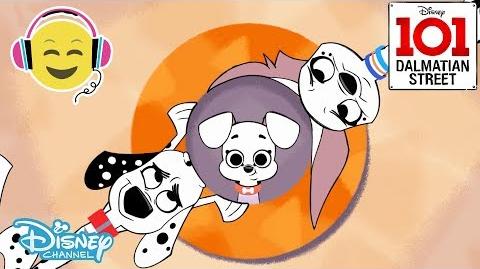 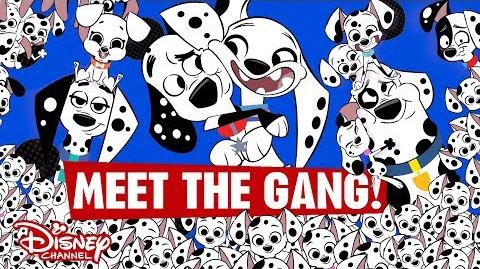 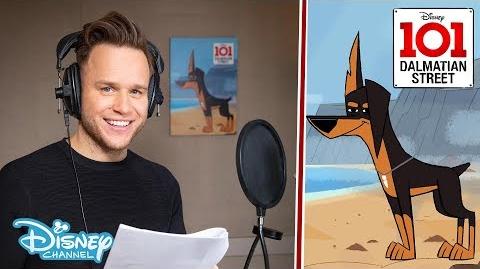