101 Dalmatian Street is a terrace house, located in the middle of Camden in London. To one side at 103 lives Clarissa Corgi and her human, Hugo, while the other side, at 99, is home to Constantin the Cat. Up the road from the house is the Camden High Street, while the park is in the other direction.

The Dalmatians live in the house without a human, which means the house is equipped with gadgets to allow the house to be maintained by its canine occupants. These include a paw scanner to allow entry to members of the household (those who the scanner does not recognize are sprayed with water), food machines that launch kibble and bowls for meal times, a stroking machine, and an automatic tooth-brusher. These creations were built and are maintained mainly by Dylan & Dawkins.

The house has numerous floors. On the ground floor, there is the living room, dining room and the kitchen. On the first floor is the puppies' main bedroom, the bathroom, a medical room, and a chew toy closet; while the third floor has a closet which acts as Delilah & Doug's room. The house also has both an attic and a basement. Within the walls of the house, there are also secret passages and hiding places. Each floor is connected with a dumbwaiter, which goes from the basement to the kitchen and then to the bathroom.

In the garden, there is a large tree which holds Dylan's treehouse, where he keeps his astronomy & paleontology collection, as well as his telescope for stargazing. The garden also has a patio by the tree, and a large trampoline.

Early concept art showed that the house was originally going to be an end-of-terrace house. This design would have been brownstone with no paint on it, as opposed to the front of the house being painted in the show itself. The house would have also been slightly smaller than its neighbours, before ultimately being the same size as its neighbours. 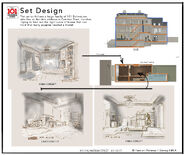 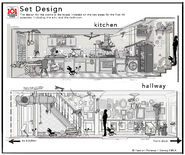 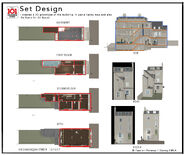