One Hundred and One Dalmatians
101 Dalmatians II: Patch's London Adventure is a direct-to-video adventure film, a sequel to the animated Disney comedy film, One Hundred and One Dalmatians, starring the voices of Martin Short, Jason Alexander, and Barry Bostwick. It was released on January 21, 2003 and garnered DVDX awards for best animated feature, best director, best editing, and best musical score. Disney re-released it on September 16, 2008.[1] On June 9, 2015, it was re-released for the first time on Blu-ray.

The film tells the story of Patch, the loneliest Dalmatian, who felt "lost in a sea of spots" until he met his TV hero Thunderbolt. Unlike several Disney direct-to-video sequels that essentially retell the original film's story (such as The Little Mermaid II: Return to the Sea), it takes characters from the original film in some new directions.

In the film, Patch was accidentally left behind after the Radcliffes moved to Dalmatian Plantation located at Cherry Tree Farm, Little Tichfield Devon. Patch becomes a part of Thunderbolt's TV show and wants to know: is he one of a kind, or just one of 101? Now is his opportunity as Thunderbolt thinks he will be replaced when it is just a plan by his sidekick Lil' Lightning to make him quit once and for all and make a jealous Lightning the star. Patch becomes heartbroken when he finds out that his favorite wonder dog is just a TV actor.

Roger and Anita Radcliffe and their canine clan are packing for the big move to Dalmatian Plantation, a home in the country with plenty of room for Pongo, Perdita, and the 99 puppies and far from the clutches of Cruella De Vil. The feistiest puppy, Patch, feels lost in a sea of spots and longs to be a one-of-a-kind wonder dog like his TV hero, Thunderbolt. While watching the The Thunderbolt Adventure Hour he hears about a chance to appear on the show while it is bring filmed in London. However, the move will interfere with his opportunity—until he's accidentally left behind in the commotion. He runs away and heads for the audition to meet his hero. Thunderbolt's "trusty" sidekick, Lil' Lightning, tries to impress the ladies, but they turn him down as they are not interested in sidekicks. After the show, Lil' Lightning tells Thunderbolt the producers want to replace him with a younger dog. In order to save his job, he decides he will go into the real world and perform an act of true heroism to prove himself. A veritable reference book to Thunderbolt's many adventures, Patch provides the perfect guide for him in his attempts at real-life heroics.

Meanwhile, Cruella is back and more obsessed with dalmatians than ever. At first, she is able to calm her frenzy through an affiliation with a spot-fixated French artist named Lars. Meanwhile, Thunderbolt makes several attempts at "heroism", telling Patch he is giving him a "Junior Deputy Test" and will let him be on the show if he can pass. This "test" involves him unwittingly giving instructions on how Thunderbolt, who has no idea how to act without a script, should save the day. Back at his trailer, Lightning's mean nature is revealed. Fed up with being second best, he cons the producer, who is both desperate and frantic over Thunderbolt going missing, into recasting him as the hero. Cruella soon discovers that Lars, despite his best efforts, is unable to recreate the look she desires.

In order to inspire him, she begins hunting for the dalmatian puppies, but is angry to find Anita's house empty. However, using a newspaper picture of Patch at the audition, she reads their new address off his ID tag. Meanwhile, he and Thunderbolt bond over their mutual fear of being "just another dog" and Thunderbolt begins teaching him how to bark properly. The Radcliffes finally become aware that he is missing as Cruella posts bail for her former cronies, Jasper and Horace, and sends them to the farm to steal the remaining 98 puppies by locking them in a stolen Kanine Krunchies truck. Lars becomes enamored with them and is inspired to paint, but Cruella announces that he going to make a masterpiece out of puppy fur. He refuses, but she simply ties him up and goes back to her original plan of making a puppy fur coat.

The imprisoned puppies use the Twilight Bark to send an SOS, which is picked up by Patch and Thunderbolt, and they set out to save Patch's family. Lightning is horrified when he discovers Thunderbolt might become a hero and hurries to the warehouse where the puppies are being held. He convinces Thunderbolt not to use Patch's stealth plan but to openly attack. However, Cruella knocks Thunderbolt unconscious with a can of paint, much to Patch's horror. When Patch runs up to Thunderbolt, Cruella spots him, shows him the newspaper photo of him and Thunderbolt, then picks him up as she explains that if it wasn't for him, she never would've found his brothers and sisters and is glad that she now has them all, then gives an evil laugh. Jasper and Horace then lock Thunderbolt and Patch in a cage. Lightning sneaks in and reveals that Thunderbolt is a fraud. Poor Patch begins to cry and is deeply hurt that Thunderbolt would lie, but soon realizes that their current situation was covered in one of the TV episodes and manages to escape. He releases his family, but Thunderbolt stays in his open cage. When Jasper and Horace wake up, they discover the puppies have escaped. They search all over while the puppies hide together on poster board to make themselves look like spot art. When Cruella notices Jasper and Horace seem to be looking for something, she asks them what they're looking for. Jasper says nothing, but Horace ill-contrivedly confesses that they haven't lost the puppies which tells Cruella that they are in fact missing. Patch then tricks them into going downstairs while the dogs escape via the roof window and get onto a double-decker bus, which they accidentally start.

Cruella follows in hot pursuit as they race through the streets of London, crashing through the filming of the new "Lil' Lightning" show. She finally corners the puppies in an alley. Patch tries to hold off the trio as the others escape, but they are undaunted. Luckily, Thunderbolt arrives (having hitched a lift with Lars) and apologizes to Patch, saying he is not a hero, but can act like one. He fakes a heart attack, distracting Cruella (and managing to have her accidentally knock out Jasper and Horace) while the puppies escape before collapsing. Patch puts the bus into reverse, forcing Cruella, Jasper, Horace, and Lil' Lightning into the Thames River.

Patch and Thunderbolt survey the scene, both letting out deep, heroic barks. Lightning is arrested, along with Jasper and Horace (who confess that Cruella forced them to commit their crimes), while Cruella, who has now driven completely insane, is sent to a mental institute. Pongo and Perdita arrive and tell Patch how proud they are of him. Thunderbolt confesses that he is just an actor, but Patch is "a real, one-of-a-kind wonder dog." A newspaper montage reveals the characters' fates: Lars, using a painting Patch accidentally made by throwing paint at Jasper and Horace, finally receives credit for his "genius"; Jasper and Horace open up a ladies' boutique with the motto: "Fur Bad, Nylon Good"; Roger's new song, "Seeing Spots", becomes a smash hit and Cruella is featured in an issue of "The Institution". A post-credits scene shows Thunderbolt, with his new sidekick Patch, in his TV show, with the other puppies serving as extras.

Rotten Tomatoes rating for the film is currently 67% "fresh," based on 6 reviews and with a 4.8 rating, but without a consensus.

The film was released direct-to-video on January 21, 2003. It includes the behind-the-scenes footage "Making of Dog-umentary". The film was re-released for a limited time only on September 16, 2008 on DVD.

The film was also released on Blu-ray in June 2015.

The Disney Wiki has a collection of images and media related to 101 Dalmatians II: Patch's London Adventure. 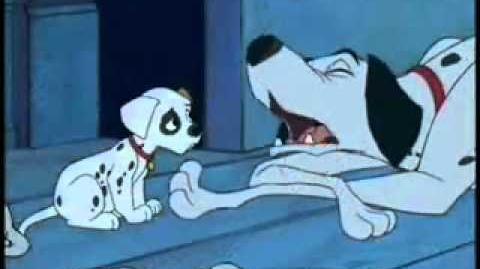