Disney Wiki
Register
Don't have an account?
Sign In
Advertisement
in: 20,000 Leagues Under the Sea, Former Disneyland attractions, Extinct Attractions,
and 2 more

20,000 Leagues Under the Sea (Disneyland attraction)

Adventure Thru Inner Space
20,000 Leagues Under the Sea was a walkthrough exhibit of sets and props from the film of the same name featured at Disneyland's Tomorrowland from 1955 to 1966.

During the construction of Disneyland, Tomorrowland was the most under-developed area of the park, with much of the space dedicated to exhibits from corporate sponsors. To fill some extra space that hadn't signed on a sponsor, Disney chose to install an exhibit on the recent film 20,000 Leagues Under the Sea. This would tie into Tomorrowland for the themes of nuclear power Disney added to the story, as well as demonstrate some of the special effects technology that went into "the Mightiest Motion Picture of Them All".

Tomorrowland was overhauled in 1966, the exhibit closed and was replaced by Adventure Thru Inner Space. A few years later, Captain Nemo's organ would emerge in the Haunted Mansion attraction. Decades later, Les Mystères du Nautilus, a new Nautilus walkthrough attraction, would open at Disneyland Paris. It would also be a point of inspiration for the queue of Tokyo DisneySea's 20,000 Leagues Under the Sea ride.

Featuring a circular floor plan and narrated by Thurl Ravenscroft, the exhibit began with a model of the Golden Arrow, the ship of Professor Arronax and a viewport of the full-size Nautilus exterior setpiece in its final resting place, which the exhibit radiates around. The tour of the Nautilus sets begins with the Wheelhouse, Charthouse, and Professor Arronax's Cabin. The Salon is the largest room on the tour and is home to a viewport looking out to the mechanical Giant Squid prop from the film. The tour continues through the Pump Room, Diving and Fitting Chamber, and the Power Room, concluding on a larger viewpoint of the Nautilus's final resting place as well as the shooting model of the Nautilus with matte paintings for Vulcania. 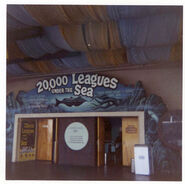 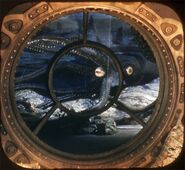 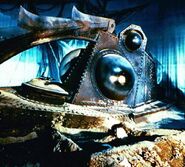