The 20th Anniversary Surprise Celebration Parade was a parade based on Disneyland's Party Gras Parade. It was shown at Walt Disney World's Magic Kingdom for its 20th anniversary. The balloons from this parade (except for Mickey Mouse and Donald Duck) were reused from the Party Gras Parade and featured carnival themes such as Mardi Gras, Carnival De Rio and Venetian Carnivals. The parade debuted in October 1991, and ran until June of 1994, when it was replaced with the Mickey Mania Parade.

Roger Rabbit's float was first, he stood on the top and the Grand Marshals sitting on the bottom. The balloon remained unchanged but with the addition of a jester's hat on and a different bow tie. A jack-in-the-box float followed on after the balloon.

Minnie Mouse was next, The Minnie balloon was unchanged from the Disneyland one except for the position of the pupils in her eyes. Minnie Mouse was led by dancing women, some women stood with her. A horsed pineapple followed on with King Louie and one of his servants standing backwards. Baloo stood at the back.

Baloo and King Louie also wore their TaleSpin outfits during the filming of the 1991 Christmas Parade.

Donald's float featured him and the 3 Caballeros. The balloon of Donald featured him with puffy arm cuffs and playing a drum. In later versions of the parade the Party Donald Duck balloon was reused. Chip & Dale rode on palm tree carts after the float.

Pluto was the next character. He was joined by the Country Bears playing tropical music. Pluto's balloon was unchanged but with the addition of maracas.

A jack-in-the-box followed on with Goofy, joined by some acrobats. Goofy's balloon remained unchanged except his shorts are detailed. The float has jester faces all over it.

The final float featured the new King Mickey balloon. The float was special, so Aurora, Snow White and Cinderella rode with Mickey.

Differences between the Party Gras Parade and this parade 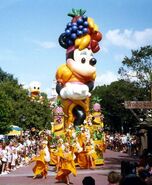 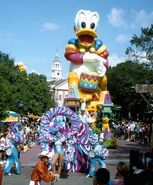 Donald Duck with puffy arm cuffs and a bongo to play

Pluto with a pair of maracas 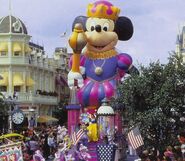 Mickey Mouse as a king
Add a photo to this gallery

Retrieved from "https://disney.fandom.com/wiki/20th_Anniversary_Surprise_Celebration_Parade?oldid=3899247"
Community content is available under CC-BY-SA unless otherwise noted.