Donald Duck's car is known as the 313 due to its license plate number. It originated, without its trademark license plate, in the 1937 short Don Donald. In it, Donald trades his burro for the car and takes his girlfriend Donna Duck (the precursor to Daisy Duck) for a drive through the desert. Unfortunately for the both of them, the car eventually breaks down and malfunctions, ruining their afternoon.

Al Taliaferro introduced the car, a 1934 Belchfire Runabout, into the Donald Duck newspaper comic on July 1, 1938. Donald is said to have constructed it himself from spare parts of various sources. It is recognizable by its license plate number 313. The car is modeled around the 1938 American Bantam. Though Donald briefly drove other cars both in Taliaferro's strip and in later stories, this car would stay with Donald throughout the following decades. The car's constant breakdowns and need of repairs is often used as a source of humor. Immediately recognizable by readers, it seems to have become as much a trademark of Donald as his sailor shirt and cap. On the other hand, his alias the Duck Avenger has the 313 (which sports a different plate, namely X, so it's nicknamed 313-X or 313-Xtreme) equipped with a lot of high tech gadgets by Gyro Gearloose to combat crime. In Recalled Wreck by Don Rosa, Donald tells his nephews that he can't buy new car parts instead of having them fixed because his car is made of parts that are no longer produced.

The car is a roadster, meaning it doesn't have windows, but has a retractable roof. Despite looking like it has only two seats, the trunk is fitted with a third one, usually occupied by Huey, Dewey and Louie, but occasionally by another guest. Born with a total red paint, the 313 gained a blue and red livery in the comic strips, even if with inconsistent scheme: sometimes it has a blue body and red fenders, sometimes the tints are reversed, depending by the author.

It is said that Donald Duck's license plate number is 313 because he was supposed to have been born on the thirteenth of March (before it was officially retconned that his birthday was June 9th).

In Mickey Mouse Works, Mickey Mouse's car bares a noticeable resemblance to 313, with the obvious exception that it does not have the "313" license plate.

The 313 in its first appearance, Don Donald. 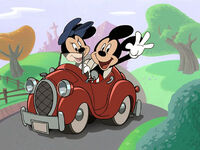 Mickey's car on Mickey Mouse Works, which looks a lot like 313. 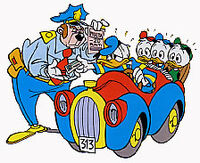 the 313 in Donald Duck's comics 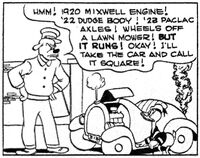