The RZ-1 A-Wing Interceptor (better known as the A-Wing) is a starfighter that appeared in the Star Wars universe.

Used by the Rebel Alliance, the A-Wing was the fastest starfighter in the galaxy at the time of the Battle of Endor. Designed by the Alliance General Jan Dodonna and Rebel engineer Walex Blissex and derived from an older design known as the R-22 Spearhead, the A-Wing was intended to be a high-speed ship capable of outrunning anything in the Imperial Navy. At the battle, a single A-Wing destroyed the Super Star Destroyer Executor when pilot Arvel Crynyd rammed the Executor's bridge, causing the ship to crash into the second Death Star. After the Galactic Civil War, it was replaced by the RZ-2 A-Wing Interceptor which is used by the Resistance.

The small, wedge-shaped ship continues to be the Alliance's main interceptor fighter. It is an exceptionally difficult ship to fly because it is constantly pushing the limits of performance. The A-Wing is constantly subjected to incredible stresses, and its engines, hull and weapons systems require constant maintenance. Since it is only 9.6 meters long, each ship component is wedged into the cramped hull, and even the lightest hit can cause critical system failures. The pilot is almost totally exposed to enemy fire.

While fast, the A-Wing is fragile and is easily damaged by enemy fire. One hit is often enough to destroy the vessel. A-Wing pilots must reply on the ship's blistering speed and their own willingness to take foolish chances to survive in combat.

The A-Wing has two wing-mounted pivoting blaster cannons which can angle sixty degrees up or down. This gives the fighter a far wider field of fire than starfighters with fixed weapon emplacements. A few A-Wings have even been modified to fire straight back. Each laser cannon has its own power generator. A-Wings sometimes are mounted with a pair of concussion-missile launchers; while these weapons are short-range, their destructive capability is superior to that of laser cannons.

The A-Wing has an unusual sensor-jamming array which serves to disrupt enemy readings, although this unit is generally effective only against fighters. This array also jams communications, allowing A-Wings to attack and get away before the enemy can summon help.

The A-Wing gets its remarkable performance from two Novaldex J-77 "Event Horizon" engines, and relies on centered thruster-control jets for maneuverability, although the J-77 engines have adjustable thrust-vector controls for enhanced performance. Adjustable stabilizer wings assist in atmospheric flight. The wing-control units are tied into the engine's thrust-vector controls, so the wings visibly adjust even in space.

The A-Wing was originally designed to defend Rebel bases and merchant ships from Imperial raids. However, Rebel tacticians eventually learned that it was far better for "hit-and fade" assaults against Imperial vessels, where its superior speed allowed the A-Wing to attack and flee before enemy fighters could be scrambled. The A-Wing was also used in combination with the Rebel fighters: "A-Wing slash" was a devastating attack that used slower fighters to distract enemy TIEs while the A-Wings closed in on the Imperial ships and cut them to ribbons 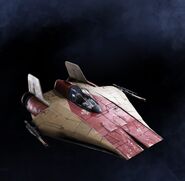