Driver
Gunner
The All Terrain Armored Cargo Transport (AT-ACT) was an Imperial Walker, that was the predecessor to the AT-AT. It first appeared in the 2016 movie Rogue One.

Bigger than its AT-AT cousin, the All Terrain Armored Cargo Transport is the Empire's go-to walker for cargo conveyance. Although designed to transport cargo and not for combat like the AT-AT, the AT-ACT can still defend itself from attacks with two heavy cannons mounted on either side of its head.

The AT-ACT features the most compartment space of all walkers in its class. Labor droids and loadlifters can pack its nearly five hundred cubic meters with thousands of metric tons of cargo. Electro-magnetic tensor fields in the knee joints bolster the legs to support heavy weight and ultradense material carried in the body above. 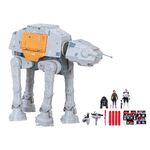