Star Wars: The Empire Strikes Back
Star Wars: Return of the Jedi
Rogue One

The AT-AT (also known as the All Terrain Armored Transport) were a series of heavily armored land vehicles used by the Galactic Empire in the original Star Wars universe.

Among the most awesome vehicles in the Empire's ground combat forces, AT-ATs were unmatched by anything in the Alliance's arsenal. At twenty meter long and over fifteen meters tall, these four-legged monsters towered over the galaxy's battlefields and resembled ancient beasts of war.

Walkers were designed to fill the need for a nonrepulsorlift heavy assault vehicle for armored platoons. While the Empire had countless repulsorlift vehicles, drive systems could be foild by gravity fluctuations, unusual planetary magnetic fields, and other special conditions; the Empire needed a vehicle which could be used on any terrain on millions of different worlds. Designers turned to ancient technology, which had received limited use in older vehicles, such as the Old Republic's All Terrain Personal Transport (AT-AP), but had never been applied on such a large scale for combat vehicles.

AT-ATs were virtually impervious to all but heavy artillery weapons. Walkers formed the core of many Imperial heavy ground assaults, often the first vehicles to leave their transport shuttle barges or drop ships and enter a combat zone. AT-AT walkers were used to crush and demoralize enemy forces. They also acted as transports for Imperial ground troops and light vehicles.

A walker's movable "head" section contains the command cockpit, with room for the commander, pilot, and gunner, It also housed all the walker's weapons. Holographic targeting systems assist the gunners with a 360 degree view of their position.

The AT-AT's main weapons are two heavy laser cannons mounted on the chin "chin". Two medium blasters are mounted on each side of the head. They can be independently rotated for different targets. The head can rotate as much as ninety degrees right or left and thirty degrees up or down for a large field of fire.

AT-AT walkers have an immense armored body section that carries five speeder bikes and up to forty troops. To unload troops, AT-AT walkers kneel to three meters above ground level and sliding ramps on he main body section extend to the ground of exiting. Instead of troops and bikes, an AT-AT walker may be loaded with two AT-ST walkers.

Beneath the main body section are the AT-AT's two immense drive motors. Four massive legs propel the walker at a top ground speed of up to sixty kilometers per hour, although this is possible only on flat, stable terrain. While their immense size gives the illusion that they are slow, plodding vehicles.

Imperial AT-ATs draw components from a number of different corporations but are assembled under strict Imperial military supervision at Kuat Drive Yards factories. Known AT-AT factories are on Kuat, Carida and Belderone; several more are suspected to exist.

Despite being large and powerful, the AT-AT isn't invincible. As previously noted, it can't easily traverse rugged terrain. The legs are prime targets for Alliance T-47 Airspeeders' harpoons and tow cables, which are used to trip the walkers. The neck is the most vulnerable part of the walker, and highly susceptible to rockets and anti-vehicle turrets. The drive motors are also exposed, and often require protection from infantry and AT-STs. Finally, the armor is no good against proton torpedoes and orbital bombardment. 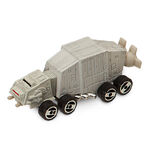 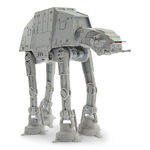 Retrieved from "https://disney.fandom.com/wiki/AT-AT?oldid=2362771"
Community content is available under CC-BY-SA unless otherwise noted.