AT-AT drivers are specialized soldiers that were trained to pilot the AT-AT walkers in blatant "shock" tactics, attacking their enemy in plain sight after having landed at great distances from their intended targets.

The Empire Strikes Back

The AT-AT drivers make their first appearance here as, under the command of Imperial Army General Maximilian Veers and joined by members of Lord Vader's elite 501st Legion, they are tasked with laying siege to the Rebellion's new base of operations on Hoth, Echo Base, and destroying the shield generator protecting the base from orbital bombardment.

The force of AT-AT walkers, dubbed "Blizzard Force" and led by Veers in the lead AT-AT, callsign Blizzard 1, soon encounter the first of the Rebellion's defensive lines and begin laying siege to it. Because of the reinforced armor of the AT-AT, many of the Rebels' defensive turrets are unable to pierce it, and Rogue Squadron leader Luke Skywalker is forced to have his snowspeeders attempt to trip the walkers up using their tow cables. Veers and his two AT-AT drivers are unfazed as they continue to advance on the Rebel defensive lines, blasting any anti-infantry or anti-armor turrets they see to pieces before targeting their primary objective: the shield generator. As Rebel ground troops begin to withdraw and retreat from their destroyed positions upon orders from Princess Leia Organa to have all remaining Rebel personnel evacuate, Veers and his two drivers shoot down one of the remaining snowspeeders before targeting the shield generator and destroying it with Blizzard 1 having its weapons set at maximum firepower.

The AT-AT drivers appear in several episodes when their walkers are used against the Lothal Rebels on various occasions. In one encounter with several former members of the Clone Army, including former 501st Legion Captain Rex, under the command of Agent Kallus, the AT-AT walkers attempted to do battle with their predecessor, the AT-TE walker that the clones were using as a makeshift home. Kallus has Rex and the other clones at his mercy before Kanan Jarrus, Ezra Bridger, and Garazeb Orrelios are able to commandeer the second AT-AT, with Zeb knocking out the two drivers before they know what hit them, and turning the walker on the one carrying Kallus. When Rex uses the main cannon of the AT-TE to deliver a mortal blow to the neck of Kallus' AT-AT, Kallus and his two drivers are able to evacuate the walker and escape, but while one driver flees riding on Kallus' speeder bike, the other is forced to run after them on foot. 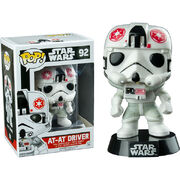