The AT-M6 (also known as the All Terrain MegaCaliber Six) is an ape-like walker built and used by the First Order, and helped the organization to conquer the worlds as they expanded their territories. It appears in Star Wars: The Last Jedi[1]

The AT-M6 is a vehicle designed to have the MegaCaliber Six turbolaser cannon incorporated into the walker in order to increase its destructive power and ensure a quick victory during sieges. To support the cannon which the walker is named after, this vehicle has legs modified to bear weight and provide the necessary stability to brace the weapon's great recoil. The turbolaser cannon also required a dedicated power generator and fuel cells that allowed it to recharge faster.

The result is a walker with enough power to destroy strong shields. Additionally, the modifications needed to incorporate the cannon made the vehicle much larger than its predecessors, the Imperial AT-ATs. It has an appearance resembling a giant ape with the huge legs causing the vehicle to have a "knuckle-walking" locomotion. The appearance of a large simian predator is a great advantage to cause fear to the enemies, forcing them to submission with psychological terror.

During the Battle of Crait, several AT-M6s are present along with two First Order AT-ATs and the Supreme Leader's command shuttle. When Luke Skywalker appears on the battlefield, all the AT-M6 repeatedly fire on him under orders of the Supreme Leader Kylo Ren, but the weapons have no effect on the Jedi Master as he is actually a Force projection. 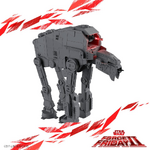