The All Terrain Tactical Enforcer, was an all terrain assault walker used by the Army of the Galactic Republic. It carries 38 Clone Troopers, one pilot, one spotter, and five gunners. It is armed with six anti-personnel laser cannons and one mass driver cannon.

An AT-TE takes on an Imperial Walker 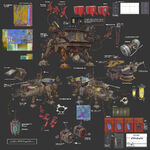 Retrieved from "https://disney.fandom.com/wiki/AT-TE?oldid=3496566"
Community content is available under CC-BY-SA unless otherwise noted.