“An epic of miniature proportions.”
―Tagline

The film is loosely inspired by the fable "The Ant and the Grasshopper" and the classic samurai film The Seven Samurai, it is the second Pixar movie and tells the story of an outcast inventor ant named Flik (Dave Foley), who recruits a group of circus bugs he mistakes for warriors when his colony is threatened by a group of grasshoppers.

Every year, a colony of ants is expected to harvest food for a biker-gang-like bunch of greedy grasshoppers. One ant, Flik, is an inventor whose creations usually do more harm than good. While trying out a mechanical harvester, he drops his machine and on auto-pilot, it knocks the pile of food into a stream just before the grasshoppers arrive. Their leader, Hopper, gives the ants the rest of the season to make good on what they owe, but orders a double ration of food after Flik stands up to him in defense of the Queen's youngest daughter Dot, who then couldn't fly, due to her wings being too small. Flik is admonished by the colony's royal council. When Flik suggests that he try to recruit some "warrior bugs" to fight the grasshoppers, Princess Atta (Dot's older sister and the eventual successor to the Queen) allows him to do so, but only to keep him out of the way.

Reaching the insect "city" (actually a pile of garbage), Flik encounters a troupe of unemployed circus bugs whose latest performance has just ended in disaster. They are being threaten by a group of flies for not paying and even Dim the big beetle is scared by maybe the even bigger horsefly, Thud and Dim's weight knocks the barrel over, causing chaos; He mistakes them for the warriors he needs. At the same time, they believe him to be a talent scout who wants to book their act. They return to the colony, much to Atta's surprise, and are immediately greeted as heroes who can end the grasshopper threat. Atta soon becomes suspicious after overhearing a conversation where both Flik and the troupe realize their mistakes. However, after they band together to save Dot from a hungry bird, she begins to think that the troupe may be able to stop the grasshoppers after all. She also starts to find herself falling in love with Flik and the feeling is mutual.

At the grasshopper gang's hideout, Hopper's brother Molt suggests they do not go back since they have more than enough food stored and the weather will soon turn bad. Hopper reminds him and the gang that if they do not keep the ants living in fear, the ants might use their superior numbers ("a hundred to one," he estimates) to run the grasshoppers out of the colony for good. The gang sets out for the island to collect their due. When Flik discovers that Hopper is afraid of birds (due to him almost getting eaten by one years ago), he proposes that the colony build a model bird to scare him away (the plan is presented by the circus bugs, so the royal council believes the "warriors" came up with the idea). The ants put their food-gathering work on hold to carry out this project. After they finish and put the bird in the island's tree, circus ringmaster P. T. Flea arrives looking for his missing performers and exposes the truth. The colony became furious that building the bird turned out to be a waste of time. Upset at Flik's deception, Atta orders him exiled from the colony, while the other ants hide the bird to pretend it never happened and rush to collect whatever food they can for Hopper. They are unable to meet the double quota he set, and when the gang arrives, Hopper takes over the anthill and forces the ants to bring him all the food on the island.

While Dot leads The Blueberries to their hidden clubhouse for safety, she overhears the gang's plans to kill the Queen once they have all the food, and after a tangle with Hopper's crazed assistant Thumper, she sprouts her wings and catches up with Flik and the troupe. She persuades them to return and put the bird plan into action, with help from her and some of the other young ants, nicknamed the Blueberries. The model frightens the gang, which almost retreats until P. T. intervenes and sets the model on fire with lighter fluid. Enraged, Hopper sends Thumper to injure Flik, but Flik is still able to stand up and rally the other ants, saying that the grasshoppers depend on the extorted food for their own survival. The entire colony swarms against the gang, forcing all except Hopper to leave. However, a thunderstorm begins, causing panic among the ants. Hopper grabs Flik and flies off, intent on killing him. Atta rescues Flik and the two lure Hopper towards the bird's nest. Hopper corners Flik and starts strangling him, revealing his intention of returning to the colony with more grasshoppers. Flik is saved when the bird appears, picks up Hopper and feeds him to her chicks.

Later, the colony adopts Flik's harvester to speed up grain collection. Atta becomes the new queen, passes the princess crown to Dot and chooses Flik as her mate. As the troupe leaves, Slim the stick insect notices that they've forgotten Heimlich the caterpillar, who emerges from the chrysalis in which he has encased himself. He pops out with a tiny pair of butterfly wings, far too small to lift him off the ground, but he's picked up by Francis the ladybug and Manny the praying mantis, and the troupe (with Molt, acting as a road crew assistant) departs with the colony's thanks. Dot joined by Queen Atta and Flik (who are shown holding hands) wave goodbye. The shot then pulls out to reveal that "Ant Island" is a small area in the forest surrounded by a little stream.

A Bug's Life vs. Antz

The plotline has several similarities to the DreamWorks' produced Antz, which had been released a month earlier. This was because of Jeffrey Katzenberg forming DreamWorks and previously being kicked out of Disney for feuding in the company around the time A Bug's Life was in development. As a result, DreamWorks started releasing films, which were not only released sometime after a Disney film, but also had similar concepts and settings. Since then, Disney and DreamWorks have remained bitter enemies.

The film was widely acclaimed from both critics and audiences and, was a box office success, grossing $363 million worldwide against its $120 million budget.

Review aggregator Rotten Tomatoes reports that 92% of critics have given the film a positive review based on 85 reviews, with an average score of 7.9/10. The critical consensus is "Blending top notch animation with rousing adventure, witty dialogue, and memorable characters, A Bug's Life is another Pixar winner." Another review aggregator, Metacritic, which assigns a normalized rating out of 100 top reviews from mainstream critics, calculated a score of 77 based on 23 reviews, indicating "Generally favorable reviews."

Todd McCarthy of Variety gave the film a positive review, saying "Lasseter and Pixar broke new technical and aesthetic ground in the animation field with Toy Story, and here they surpass it in both scope and complexity of movement while telling a story that overlaps Antz in numerous ways." James Berardinelli of ReelViews gave the film three and a half stars out of four, saying "A Bug's Life, like Toy Story, develops protagonists we can root for, and places them in the midst of a fast-moving, energetic adventure." Roger Ebert of the Chicago Sun-Times gave the film three and a half stars out of four, saying "Will A Bug's Life suffer by coming out so soon after Antz? Not any more than one thriller hurts the chances for the next one. Antz may even help business for A Bug's Life by demonstrating how many dramatic and comedic possibilities can be found in an anthill." Kenneth Turan of the Los Angeles Times gave the film four out of five stars, saying "What A Bug's Life demonstrates is that when it comes to bugs, the most fun ones to hang out with hang exclusively with the gang at Pixar." Peter Stack of the San Francisco Chronicle gave the film four out of four stars, saying "A Bug's Life is one of the great movies – a triumph of storytelling and character development, and a whole new ballgame for computer animation. Pixar Animation Studios has raised the genre to an astonishing new level". Since then, DreamWorks and Pixar have been bitter enemies.

Richard Corliss of Time gave the film a positive review, saying "The plot matures handsomely; the characters neatly converge and combust; the gags pay off with emotional resonance." Owen Gleiberman of Entertainment Weekly gave the film a B, saying "A Bug's Life may be the single most amazing film I've ever seen that I couldn't fall in love with." Paul Clinton of CNN gave the film a positive review, saying "A Bug's Life is a perfect movie for the holidays. It contains a great upbeat message ... it's wonderful to look at ... it's wildly inventive ... and it's entertaining for both adults and kids." Michael Wilmington of the Chicago Tribune gave the film three and a half stars out of four, and compared the movie to "Akira Kurosawa's Seven Samurai" (with a little of another art-film legend, Federico Fellini, tossed in)." where "As in 'Samurai', the colony here is plagued every year by the arrival of bandits." On the contrary, Stephen Hunter of The Washington Post gave the film a negative review, saying "Clever as it is, the film lacks charm. One problem: too many bugs. Second, bigger world for two purposes: to feed birds and to irk humans."

Title card in the widescreen version

Title card in the fullscreen version 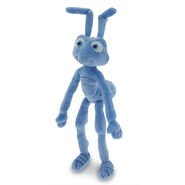 Heimlich Bobblehead
Add a photo to this gallery

Retrieved from "https://disney.fandom.com/wiki/A_Bug%27s_Life?oldid=4388613"
Community content is available under CC-BY-SA unless otherwise noted.