"A DuckTales Valentine" (also titled "Amour or Less") is a special Valentine's Day-themed episode of DuckTales that originally aired as a prime-time special on The Magical World of Disney on February 11, 1990. To fill out an hour-length slot, the original Magical World of Disney broadcast had the episode followed up with a rerun of an earlier episode of the anthology series, A Disney Valentine (which included Mickey's Delayed Date, Mr. Duck Steps Out, and Canine Casanova).

When Scrooge finds Cupid's arrows in the temple of Aphroducky, he gets more than he bargained for when Aphroducky storms his mansion, looking for the arrows, and ends up falling in love with him after accidentally getting struck by one of the arrows. 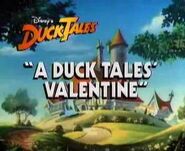 The title card used in reruns.

Advertisement for the premiere broadcast.

Retrieved from "https://disney.fandom.com/wiki/A_DuckTales_Valentine?oldid=4081638"
Community content is available under CC-BY-SA unless otherwise noted.