March 5, 2018
"A Fool's Hope" is the seventy-third episode of the Disney XD animated series Star Wars Rebels. It premiered on March 5, 2018, and is the fourteenth episode in the fourth season.

After a struggle of bypassing the Imperial blockade over Lothal, Hera, Kallus and Rex return to the Seelos System in need of help from Rex's fellow clones, Wolffe and Gregor, along with Ketsu Onyo and Hondo Ohnaka in Ezra's goal to liberate his home world.

Meanwhile back on Lothal, Ezra believes that Thrawn will be returning, and that they must act at once. He already has a plan that will only require one person. At Captial City, Governor Pryce is on edge in a desperate search for the Rebels. After her actions in destroying the fuel depot, Thrawn threatens to have her execute unless she can find and capture the Rebels. Just then, she receives a surprising transmission from Ryder Azadi who is willing to hand the Rebels over to her in exchange for amnesty. Pryce accepts and Ryder sends her the coordinates to there secret base.

At the Rebel camp, the Rebels are loading their crawler when they suddenly come under attack by Imperial Forces led by Governor Pryce, accompanied by Rukh. Five Imperial Patrol Transports arrive and a squad Jumptroopers are deployed. The Rebels do their best to fight off the Imperials, but as the fight wages on more arrive. Hera is informed that they are under attack. She arrives back at Lothal with Wolffe, Gregor, Ketsu, and Hondo onboard. They sneak pass the Imperial blockade by attaching themselves to an approaching Imperial freighter. Back on the surface, the Rebels quickly become overpowered and as a result they lose the crawler. The are forced to surrender to Governor Pryce. Ryder steps forward admitting his treachery to the Rebellion, but then reveals to Pryce that it was all a trap to capture her. Just then, the Ghost shows up and attacks the Imperial Patrol Transports. The battle then resumes with Rex, Gregor, Wolffe, and Kallus joining in the fight. Hera gives the Transports a chase through the mountains, and easily destroys them one by one. The Rebels are still outnumbered, but Ezra gets everyone to retreat into the caves. The Imperials surround the entrance, and Rukh goes in with some Stormtroopers.

At first the Imperials think they have them trapped, but then the Loth-Wolves emerge from the darkness and attack. With the wolves by their side, the Rebels defeat the Imperials and are victorious. Rukh is lost in the fight, and Pryce is captured. Eight troopers remain standing and willingly surrender. Even though they have won this battle and succeeded in capturing Governor Pryce, the fight is far from over. They still have to chase the Empire from Lothal and show the Galaxy once and for all that they can be defeated. 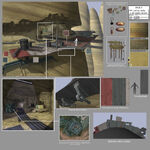 Retrieved from "https://disney.fandom.com/wiki/A_Fool%27s_Hope?oldid=3369289"
Community content is available under CC-BY-SA unless otherwise noted.