Images from A Goofy Movie. 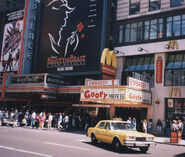 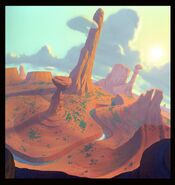 Concept art of the desert canyons by Fred Warter.

Clean-up model sheet of Treeny for the On the Open Road musical number.
Add a photo to this gallery

These twenty-two storyboards were drawn by storyboard artist, Andy Gaskill.

Max was connecting some wires by himself before he was doing a Powerline concert.

Max was seen in a concert on the school's mounted television.

Max was sitting in detention while Principal Mazur (in early concept) calls Goofy at the Photo Store about his son.

Goofy's car was on their way to their vacation with Max.

Goofy taking a picture of Max in his car.

Max looking up the map where he and Goofy had some places to go on a road trip.

Goofy points on a sign that says Possum Musuem (that would have been Lester's Possum Park).

Goofy hanging upside down with three possums on a forest background and a photographer.

Max pointing at a sign that says, Waterslide Paradise, the amusement park where he and Goofy were riding on a roller coaster.

Goofy with a cowboy hat and an axe scares Max and the campers away.

The grizzly bear (that would have been changed into Bigfoot) grabs the wheels of Goofy's car while he and Max are in horror.

Goofy and Max screaming after they saw a grizzly bear.

Goofy and Max got the alphabet soup after they got an idea to get the bear to sleep.

At night, the bear is sleeping at the top of Goofy's car while he and Max sleeping inside.

The closeup of the bear, Goofy and Max sleeping together.

Goofy telling Max with his hand pointing which direction and place they want to go.

While at the cave, Goofy falls with Max after the bats scares the tourists away.

P.J. saying "Hello.", to Max while he is outside at the campsite.

Goofy is holding a fishing reel while Max is holding on him doing the "Perfect Cast".

Goofy and Max hug each other at the cliff of the waterfall.
Add a photo to this gallery
Retrieved from "https://disney.fandom.com/wiki/A_Goofy_Movie/Gallery?oldid=3654510"
Community content is available under CC-BY-SA unless otherwise noted.