Walt Disney introduces the show with a speech on how fathers often go unappreciated, getting little more than a gaudy tie on Father's Day, and says that the show is dedicated to fathers everywhere. The show features Goofy hosting the show, going through an average day as a father.

Front and back covers to the RCA SelectaVision release. 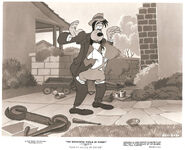 Retrieved from "https://disney.fandom.com/wiki/A_Salute_to_Father?oldid=3871063"
Community content is available under CC-BY-SA unless otherwise noted.