Frozen
A Sister More Like Me is a children's book from Disney's 2013 animated film, Frozen, featuring Elsa and Anna. It also includes pictures by one of the film's artists, Brittney Lee.

Explore the wintery world of magic in Walt Disney Animation Studio’s latest film, Frozen. This jacketed picture book features an original story about Anna and Elsa, the film’s two sisters, as well as illustrations by one of the artists who worked on the film. 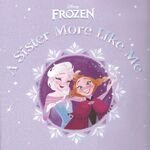