A Spoonful of Sugar

A Spoonful of Sugar

"A Spoonful of Sugar" is a song from the film and musical versions of Mary Poppins, and it is composed by the Sherman Brothers.

It is an uptempo song sung by Mary Poppins, instructing Jane and Michael Banks, to tidy up the nursery. Even though the task is daunting, with a good attitude, it can still be fun. It is heard throughout the film as Mary's leitmotif.

In the musical, Robertson Ay and Mrs. Brill are helping Winifred Banks with a tea party she is planning. Mrs. Brill tells Robertson Ay to make the frosting, which Jane and Michael try to do instead (with Robertson Ay giving them warnings). This causes the kitchen to fall apart. Winifred is shocked to see it in this shape when she came down with Mary. Mary sends her upstairs to get dressed, while she gives Jane and Michael some medicine, which comes out in different colors (just like in the film). Cleaning up the kitchen is similar to doing so to the nursery in the film.

At the end, Mary, Jane, and Michael head out on their outing much to Ellen's delight. The song is mixed with "The Bare Necessities" and "It's a Small World", also Sherman Brothers songs, in the final number of On the Record, a short lived revue of Disney songs. It was included on Disney's Sing-Along Songs: Be Our Guest and Disney's Sing-Along Songs: Collection of All-Time Favorites: The Magic Years.

In the stage adaptation, the song relatively remains the same. The only change is new lyrics added in the finale where Mary Poppins leaves, satisfied with Banks family's improvement.

Julie Andrews had not yet committed to play the part of Mary. She didn't like the song that was written for her and did not think it made an appropriate signature song, as it did not have enough snap to it. The original song was called "The Eyes of Love". Walt Disney instructed the Sherman Brothers to come up with something more catchy. Robert B. Sherman, who is the primary lyricist of the duo arrived home from work one evening, having worked all day trying to come up with a song idea. As he walked in the door, his wife, Joyce, informed him that the children had received their polio vaccine that day. He asked his five-year-old son if it hurt (thinking that the boy had received a shot). He responded that it (the medicine) was put on a cube of sugar and that he swallowed it. Realizing what he had, Robert arrived at work early the next morning and suggested the lyric to his brother, Richard, who at first thought it was the worst song idea ever. Later, he played a melody to it (After thinking about Mary singing "Stay Awake" when she wants them to go to sleep. What this meant was that he thought whenever the lyric was the "down" part of the first chorus line, to go up with the music). With that, the song was born.

In every job that must be done
There is an element of fun
You find the fun, and... snap!
The job's a game!
And every task you undertake
Becomes a piece of cake
A lark! A spree!
It's very clear to see

The honey bees that fetch the nectar
From the flowers to the comb
Never tired of ever buzzing
To and fro
Because they take a little nip
From ev'ry flower that they sip
And hence, they find
Their task is not a grind...


Mary Poppins: With every job when it's complete
There is a sense of bitter-sweet
That moment when you know the task is done
Though in your heart you'd like to stay
To help things on there way
You've always known they must do it alone

(Spoken)
There, practically perfect, and I hope it remains so. 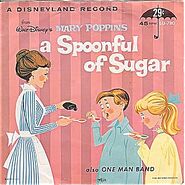 Disney Peaceful Piano - A Spoonful of Sugar (Audio Only)-2