English
A Tiger Walks is a 1964 family film, directed by Norman Tokar and produced by Disney. It is based on a novel of the same name by Ian Niall. It was Indian actor Sabu's last film which released only a few months after his death.

A mistreated Bengal Tiger named Raja escapes from a traveling circus, and hides in the woods surrounding the small town of Scotia. The new arrival starts a panic, and the townsfolk want Raja killed with the exception of Julie Williams (played by Franklin), the sheriff's daughter.

Julie wishes to capture Raja and put it in a zoo, and she fronts a nationwide attempt to raise enough money to purchase Raja from the circus. But first, she, her father, and an Indian tiger trainer have to find Raja before the National Guard, who are under orders to shoot the tiger on sight. 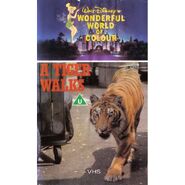 Retrieved from "https://disney.fandom.com/wiki/A_Tiger_Walks?oldid=4491372"
Community content is available under CC-BY-SA unless otherwise noted.