An elf named Tobias needs help after breaking Donny's new toy, Commander Crush, so Doc and her friends go to the North Pole to get a new part. With Doc's dismay, Stuffy, Chilly, and Lambie get piled into the toy room.

When Tobias the elf accidentally breaks a piece of Donny's Christmas present, Doc, and the toys travel to Santa's workshop in the North Pole to find a replacement part.

It's Christmas Eve in Doc McStuffins' house. When the toys sneak downstairs to leave Doc's present under the tree, they find a crying elf named Tobias with a broken Commander Crush action toy. Doc discovers that Crash's gears on the back are broken and cannot fix it so Tobias sends Doc and her toys to the North Pole to repair the toy before Santa Claus finds them. 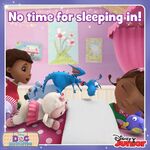