1999-present
Aaron Paul Springer is an American cartoon director, screenwriter, producer, and storyboard artist. He is best known for his work on the Nickelodeon animated series SpongeBob SquarePants.

His works for Disney are listed below. Acting-wise, he provided the voice of Billy Dilley and Evil Billy in Billy Dilley's Super-Duper Subterranean Summer, a bird and Director 1 and 2 in Wander Over Yonder and provided additional voices in Mickey Mouse. 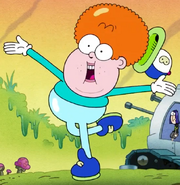 Retrieved from "https://disney.fandom.com/wiki/Aaron_Springer?oldid=4422436"
Community content is available under CC-BY-SA unless otherwise noted.