Star Wars: Attack of the Clones
Star Wars: Revenge of the Sith
Star Wars: The Rise of Skywalker (voice cameo)

Sith, war, the dark side

Aayla Secura is a Twi'lek Jedi Master and one of the main characters who appeared in the Star Wars universe.

Aayla was born Force-sensitive on the planet Ryloth. When she was two years old, she was discovered to by the Jedi Order and brought the to Coruscant Jedi Temple to be trained as a Jedi. At some point, she was assigned to Jedi Master Quinlan Vos to be his apprentice. Aayla eventually obtaining the rank of Jedi Master, becoming one of the finest Jedi that the Jedi Order has ever had. Shortly after the Clone Wars had begun, Aayla became a Jedi General.

By the end of the Clone Wars, the leader of the Sith Order (Palpatine) initiated Order 66, ordering the Clone Troopers to turn against their Jedi comrades and kill them. Thus, while Aayla was on the planet Felucia, she was killed by her own clone troopers.

As a Jedi, Aayla is empathic, highly intelligent, and wise, but also impulsive and slightly mischievous. She is also kind and always ready to share her knowledge. She had a lot of patience and was highly resourceful.

Aayla is athletic, beautiful, and voluptuous, and has blue skin, a common color of her species. Like all Twi'leks, she has two lekku emerging from the back of her head and rudimentary horns on either side of it where a secondary pair of headtails would grow to suppress fat on more portly Twi'leks. She has brown eyes and eyebrows and cosmetically pink-stained lips. She also has a very strong look to her face, according to a clone trooper she worked with. She wears a brown, leather crop-top with a singular left sleeve (though her other arm is exposed) that contracts her busty chest. She also wears brown pants, charcoal brown leather boots, and a brown headpiece around her forehead that extends to her lekku.

Aayla is first seen in the film descending a staircase briefly following Obi-Wan to find Yoda and the Younglings. She later went with a strike team led by Mace Windu to rescue Obi-Wan Kenobi, Anakin Skywalker, and Senator Padmè Amidala on Geonosis. At one point, she kicked apart a battle droid while twirling her lightsaber, behind an unidentified Jedi killing a Geonosian. They were eventually cornered by droids, but were saved by Master Yoda and the Clone Army. Secura fought in the following battle, and is seen fighting alongside Kit Fisto. She also made an advance on a Core Ship near the end of the battle. Secura was made a general in the Clone Wars.

Aayla is first seen meeting with Mace Windu, Yoda, Ki-Adi-Mundi, and Clone Commander Cody. While on Felucia with her clone troopers, Chancellor Palpatine ordered the execution of Order 66 after he was revealed to be the Dark Lord of the Sith, Darth Sidious. Her clones pointed their blasters at her and began to fire, killing her before even hitting the ground. Even when she fell to the ground, they continued to pummel her with laser blasts.

Aayla's voice, along with several other Jedi of the past, gives encouragement to Rey so she can defeat and destroy Darth Sidious once and for all.

Aayla appeared as a supporting character in some episodes. In one episode, she is stranded on a neutral planet with Anakin Skywalker, Ahsoka Tano, Captain Rex, and Commander Bly. They are helped by the Lurmen creatures to defend the attack from Lot Dodd and the Separatists. They made it out in the end and successfully brought Dodd into custody.

Aayla appears as a walk around character at Star Wars Weekends. Additionally her actress, Amy Allen, appeared to sign autographs at some of the events over the years. 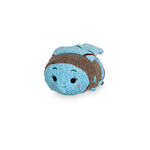