Archivist at the National Archives

Not much is known about her early life. She was born in Germany in 1976 but immigrated with her parents when she was a child. Sometime before 2004, Abigail took the job of an archivist at the National Archives in Washington, D.C. As a hobby, Chase collects vintage campaign buttons. She appears to have an ex-boyfriend, whom she dislikes, named Stan.

She was told by Benjamin Gates (posing as Paul Brown) and Riley Poole that the Declaration of Independence will be stolen by Ian Howe, with whom both of them worked. Supposedly, there is a treasure map in invisible ink on the back of the Declaration. Abigail was initially incredulous of the map's existence, and alerted the guards when Gates attempted to steal the declaration. However, her yells alert Howe to Gates' presence, and Howe shoots at the both of them.

During the panic of the gunshots, Ian Howe and his team kidnap Abigail in their van and drive away. Ben and Riley chase after the van to rescue both Abigail and The Declaration of Independence. After successfully rescuing them, Abigail becomes furious at Ben for stealing a priceless historical document, and attempts to run away with it as well.

To keep the document safe, Chase reluctantly agrees to help Ben and Riley find the hidden inscription. Together, they drive to Ben's dad's house, where they can temporarily hide from the authorities. When they arrive at Patrick Henry Gates' residence, he incorrectly assumes she is pregnant with Ben's child. This upsets both Ben and Abigail. Using heat and lemon juice, the trio reveal numbers hidden on the back of the document. However, Patrick finds out that they stole the Declaration of Independence, and the group must leave after binding him.

After realizing that the next clue is in Philadelphia. The clues lead the three to The Silence Dogood letters in Philadelphia and then to the Liberty Bell and Centennial Bell, where Ian catches up with them. Ben and his friends are unable to successfully outsmart Ian and he takes the Declaration. Riley and Abigail make a deal with Ian to tell him what the final clue so that they won't turn Ben over to the police. The final clue is at Trinity Church where Ben is given a choice to whether to save her or the Declaration. He chose to save the Declaration and she agrees with him. They eventually trick Ian into believing that the treasure is not there but in Boston. Afterwords they find the treasure and make a deal with the FBI whereby Abigail's record is cleared and Ian and his henchmen are the only ones to go to jail. At the end of the movie it's clear that Ben and Abigail are in a serious romantic relationship.

At the beginning of the movie, Abigail and Ben are in the midst of breaking up. She is first seen walking into her house with her date, Connor. Upon entrance, she interrupts a break-in conducted by Ben and Riley. After arguing about personal issues, such as Ben always having to get the last word, she agrees to share with them a document that allegedly proves that Thomas Gates, Ben Gates' ancestor, was involved in the Lincoln Assassination.

Using Spectral imaging she and Ben find a cipher on the document that could help Ben prove Thomas Gates was not part of the infamous Assassination. The cipher leads Ben and Riley to the French Statue of Liberty to read a secret inscription on the statue's torch made by Edouard Laboulaye.

Meanwhile, Abigail meets with Mitchell Wilkinson, the man who provided the aforementioned documents. During her dinner with Wilkinson, she receives a call from Ben, asking her if she would help him with another cipher. Abigail initially refuses, but secretly decides to meet with Ben and Riley in London a few days later.

Abigail meets with Ben at Buckingham Palace unannounced. Ben immediately reacts harshly, causing a scene. Abigail quickly realizes that Ben is acting and plays along. The two consequently are arrested, and are held in a private cell, where they can easily escape and reach private rooms. After a few moments of sneaking around without being noticed, the two reach the Queen's private study, where one of the famous Resolute Desks is kept. With the help of Riley, Ben and Abigail realize that the desk itself is a puzzle, and by opening the drawers in a specific way, will reveal a hidden compartment, where an ancient wooden plank is kept.

However, Mitch Wilkinson discovers the three treasure hunters, before they can leave the palace, and he chases them through the streets of London. To get Mitch off their tail, Ben takes a photo of the plank, and throws it into the Thames River

Back in the United States, the inscription on the plank is revealed to be a pre-Columbian-American era language. Together, Ben and Abigail reason that the best person who can help them translate the language is Ben's mother, Emily Appleton Gates, a Native American languages professor. The two, along Riley and a reluctant Patrick, visit her at the University of Maryland in College Park, Maryland.

Although Emily remains curt towards Patrick, her ex-husband, she is friendly towards Abigail. However, Emily is disappointed and anxious that Ben is going on another treasure hunt. Nevertheless, Emily quickly translates the photo of the plank, but tells the group that the plank of wood is only half a map. Ben reasons that the other is in The Oval Office, where the second Resolute Desk is held.

During the Easter Egg Roll, Abigail and Ben go to the White House, and she gets her boyfriend, Connor to show them inside the office. There Abigail pretends to drop an earring as a distraction, so that Ben can search the desk. During Ben's examination of the desk, Abigail distracts Connor with both her body, and the search for the lost earring. However, when Ben opens the secret compartment, the plank is missing. When Ben signals that he is done searching, Abigail "finds" her earring and stops searching with Connor, much to his disappointment.

Later, Riley, Ben, and Abigail discuss where the missing plank could be located. Riley Poole, who recently wrote a book on American myths and legends reasons that the plank is located along with the President's Book of Secrets. Ben and Abigail are nonplussed by Riley's strange remark, and he explains that the Book of Secret's is a hidden collection of secrets containing information from Area 51 to the Kennedy Assassination. Although they all agree that they must find the Book of Secrets, Riley is upset that neither Ben nor Abigail had read his book before then.

Desperate to find the book, Ben gets the wild idea to kidnap the President of the United States of America during his birthday party at Mount Vernon. Abigail initially attempts to talk Ben out of the idea, but fails. In the end, she, Patrick, and Riley help Ben in his dangerous endeavor.

After successfully attaining the location of the Book of Secrets from the President. Ben meets up with Abigail and Riley at the Library of Congress. Together the three of them locate the book. Upon reading it, the treasure hunters finally realize that the planks contain information leading them to Mount Rushmore, where the City of Gold is secretly located. Realizing that he must prove that the City of Gold exists to show that Thomas Gates was not guilty of Lincoln's assassination, Ben and his team travel to South Dakota.

At Mount Rushmore, Abigail reunites with Patrick and Emily. Mitch, however, also joins them, and decides that to discover the treasure with them. Using the clues provided by Emily's translation of the wooden planks, the team pours water over the rocks on Mount Rushmore, hoping to find a symbol that will reveal itself when wet. Abigail quickly finds a symbol of an eagle on a stone, and calls the others to look at it. When Ben places his hand inside the stone, much to everyone else's anxiety, he pulls a latch that reveals a door in the mountain.

Inside the mountain, Patrick congratulates Ben on making it so far. However, Riley and Abigail are lured into a booby-trap that sends everyone but Patrick and Emily down an ancient chute. When the group falls on the ground, they are overwhelmed to learn that the floor tilts unsafely. Abigail, with her flashlight, locates a ladder they can climb to safety with. Climbing up the ladder one-by-one, the floor begins to break before Ben can reach safety. However, Abigail and Mitch locate a large heavy statue, and balance the shaky floor with it so Ben can safely reach the ladder.

Afterwards, Ben, Abigail, Mitch, and Riley reunite with Patrick, and Emily, who have recently reconciled their relationship. Together, they enter a room filled with gold. Abigail is astounded by the amount of historical items beautifully preserved in the cave. However, the group are suddenly bombarded by vast amounts of water flooding the cave.

The team races for an exit, but are trapped by a heavy door. However, by using an old, heavy, revolving crank, the door begins to open. Mitch, who realizes that the door will only stay open if a person stays behind, halts the team's escape and holds Abigail with a knife to her throat. With Abigail's life on the line, the team agrees to play by Mitch's rules. Nevertheless, the crank itself

begins to break, and Mitch, who has a change of heart, stays behind to keep the door open, and sacrifices himself. Abigail and the rest of the team make it to safety generally unscathed. 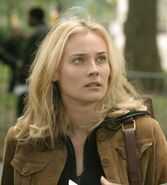 Retrieved from "https://disney.fandom.com/wiki/Abigail_Chase?oldid=3747334"
Community content is available under CC-BY-SA unless otherwise noted.