Monty Citymouse (cousin)
Abner Countrymouse is a country bumpkin who is attracted by the temptations of the big city by his cousin Monty Citymouse in the 1936 Silly Symphony animated short The Country Cousin.

The opening shot shows Abner staring up at the city skyscrapers. He receives a "Mouse-O-Gram" from his cousin, Monty, telling him to come and live with him in the city. He is then shown walking along a railroad toward the city. Monty arrives, only to lead Abner to a meal that the human residents of the household have set out.

The two mice begin by dining on cheese, but Abner lacks any sense of etiquette, and soon begins gorging himself on celery, cream, and mustard. Drinking Champagne, Abner finds himself partial to the taste and becomes drunk, provoking the disdain of Monty. Abner begins seeing in double-vision, and creates more noise, knocking down a pile of bread.

Abner then looks at his reflection in a block of jelly. As he walks away, he slips on a piece of butter on a saucer. The saucer catches Monty on the way and breaks several pieces of dishware. Monty gets angry with him, and as they are now on the floor, he attempts to find a secluded spot, safe from the family's cat. Abner kicks the cat's behind, and a cat bares its teeth at Abner. This only leads him to look at the inside of its mouth, bringing Abner back to his senses. He is then chased by the cat, first receiving an electric shock by jumping inside a socket, and then ending up on the city street when he jumps out of the window.

Abner is forced to escape from the footsteps of the people, a bike, an electric tram, and other vehicles. He finds himself at the city limits again and flees back to his home town.

Abner appeared in the theatre attraction alongside Monty, which ran at Walt Disney World's Magic Kingdom from 1971 to 1980 and then at Tokyo Disneyland from 1983 to 2009. Abner plays the saxophone. 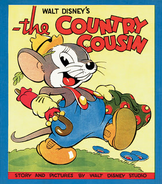