The Avengers: Earth's Mightiest Heroes
What If...?

Dr. Erskine was created by Jack Kirby and Joe Simon.

He is a brilliant scientist who created the Super Soldier Serum, a chemical formula that grant superhuman strength and invulnerability. However, if it's not combined with a certain type of radiation known as Vita Rays, it can also cause horrifying mutations. The Nazi HYDRA agent Johann Schmidt stole the Super Soldier Serum from Dr. Erskine and injected himself with it without exposing himself to Vita rays, turning into the deformed superpowered menace Red Skull.

Feeling guilty about being somewhat responsible for creating Red Skull, Dr. Erskine joined the O.S.S. (the organization that would later become S.H.I.E.L.D.) and injected the Super Soldier Serum into a brave and kindhearted soldier named Steve Rogers, exposing Steve to Vita Rays. Thus, Steve became the superhero Captain America. However, an HYDRA agent acting on Red Skull's behalf shot Dr. Erskine on the spot, killing him.

Dr. Erskine was himself kindhearted and gentle, acting as a father figure to Steve, and he wanted Steve to be injected with the Super Soldier Serum so that good could be brought into the world by giving superhuman strength to someone noble who would use it to protect innocents from the forces of evil. 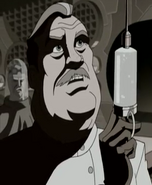 Retrieved from "https://disney.fandom.com/wiki/Abraham_Erskine?oldid=4199655"
Community content is available under CC-BY-SA unless otherwise noted.