Assassination; Shot in the head by John Wilkes Booth

Robert Todd Lincoln
Edward Baker Lincoln
William Wallace Lincoln
Tad Lincoln
Abraham Lincoln was the 16th President of the United States, particularly noted for his leadership during the Civil War to reunite the union, his delivery of the Gettysburg Address, the Emancipation Proclamation, and the Thirteenth Amendment. Nicknamed "Honest Abe", he was a controversial figure in his own time, but has since been recognized as one of the greatest presidents, ranked with George Washington and Thomas Jefferson. A key factor in this was not only his statesmanship, his goal to preserve the union, and his opposition to slavery, but also his assassination on April 14, 1865, five days after Robert E. Lee surrendered. He also became the first American president to be assassinated (but not the last, as it was John F. Kennedy) and the third to die in office. His image adorns the five-dollar bill and penny.

As an iconic figure of American history, Lincoln has been spoofed and homaged a number of times in popular culture.

A folk doll version of Lincoln possessed by the ghost of someone else was a planned character for the scrapped feature film project My Peoples, or A Few Good Ghosts.

He was mentioned in Toy Story 2 by Jessie who uses the expression, "Sweet mother of Abraham Lincoln!".

He is played by Glenn Beck in National Treasure: Book of Secrets.

He was portrayed by Daniel Day-Lewis in the 2012 film, Lincoln.

In this film, Crazy Harry blows up Mount Rushmore to be in his image.

Abraham Lincoln was one of 22's mentors. He appears a few times during flashbacks, as well as a personification in 22's lost soul.

He appears twice where he personified on a penny.

He appears in the Quack Pack episode "The Really Mighty Ducks", along with the other three presidents.

He was spoofed by Pumbaa in the Timon & Pumbaa episode; "Catch Me if You Kenya" and Quint in "Klondike Con" and a face statue of him was seen in "New Guinea Pig."

In the Dave the Barbarian episode; "Not a Monkey", Dave was seen wearing a Lincoln hat with a fake brown beard to replace his missing hair.

Two evil robot versions of him also appeared in the Phineas and Ferb episodes "Mom's Birthday" and "Let's Bounce".

He appears in this time travel film.

A giant potato puppeteered by Donald Duck in the Mickey Mouse episode "Potatoland" is made as a satire of the Lincoln animatronic from the Disney Parks.

Gamer's Guide to Pretty Much Everything

He appears in Gamer's Guide to Pretty Much Everything episode "The Rankening".

He appears in an episode of this show.

He appears in the Bizaardvark episodes "The Collab" and "First Day of School".

He appears in the K.C. Undercover episode "Twin It To Win It".

He was also mentioned in a Milo Murphy's Law episode titled "Athledecamathalon".

Abraham Lincoln's ghost also appears in Legend of the Three Caballeros. He is depicted as an anthropomorphic goose and appears in the seventh episode, "Mount Rushmore or Less". In the episode, Lincoln, aided by Thomas Jefferson and Theodore Roosevelt, approaches and confronts Baron Von Sheldgoose and Lord Felldrake Sheldgoose to prevent the two from causing more havoc in Mount Rushmore. As a result, Lincoln, Jefferson, and Roosevelt dislodge the two out of Mount Rushmore. Upon keeping Sheldgoose away from the monument, Lincoln gives Washington the Spark of Life to undo the spell Sheldgoose has caused as the Caballeros are deemed as eternal guardians of the Spark just before Xandra, José Carioca, Panchito, and Donald Duck return to Clinton Coot's Cabana.

He appears in the The Ghost and Molly McGee episode "Not So Honest Abe". He is well respected in the ghost realm and friends with the other presidential ghosts. He aids Scratch and Molly McGee with a report on his life. The episode depicts him playing the piano, despite the fact that in real life that he never played an instrument.

Lincoln was Walt Disney's favorite president. As a child, he would dress up like Lincoln for a school President's Day presentation and recite the Gettysburg Address. This fondness for Lincoln would result in choosing him as the basis for the first human Audio-Animatronics figure and develop Great Moments with Mr. Lincoln for the State of Illinois Pavilion at the 1964 New York World's Fair. It would be moved to Disneyland's Main Street, U.S.A..

This figure would serve as a proof of concept for a larger project that would become The Hall of Presidents in Liberty Square at the Magic Kingdom in Walt Disney World. Here it was joined by audio-animatronics of every U.S. president in American history.

Pumbaa wearing Lincoln's hat in "Catch Me if You Kenya" 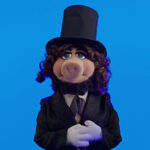 Washington, Jefferson, Roosevelt, and Lincoln as Groucho in The Really Mighty Ducks

Lincoln in The Muppets

Lincoln in Legend of the Three Caballeros

Lincoln in The Ghost and Molly McGee