To make his dad proud

His lollipop
His bottles of soda

Gets respected by all for having saved the town.

"Come on. All I need is a chance."
"The sky is falling!"
Ace "Chicken Little" Cluck is the main protagonist of the 2005 Disney animated film of the same name. He is voiced by Zach Braff.

Chicken Little was originally written as a female character, to have been voiced by Holly Hunter, though plans shifted when executives asked for more of a father-son dynamic in the film.

Chicken Little has white feather and a red rooster comb. He wears a green and white striped T-shirt, green glasses, and brown shorts.

He is smart indeed. But Chicken Little always worried everything sometimes and try to get a lot of attention to everybody to proof that the sky is falling.

After Chicken Little sees a hexagon-shaped object with an image of the sky fall from the sky he believes that the sky itself is falling and tries to warn the town but in doing so he throws the town into a panic that causes him to be accused of being insane. An outcast ever since and the target of bullies, Chicken Little and his small circle of friends have since been trying to figure a way for him to change his image. Chicken Little sees an opportunity and tries signing up for the school baseball team, like his father was years ago. Chicken Little ends up winning the game and is seen as popular again, but another incident with a hexagonal object and other signs of alien activity begins to unravel things. A lot happens in Chicken Little's small neighborhood as he tries to figure out the truth behind the falling piece. Template:Sec-stub

Chicken Little is a Summon that appears in Kingdom Hearts II. He is obtained by talking to Merlin after visiting The Land of Dragons and Beast's Castle (or Olympus Coliseum if Sora skipped either of the aforementioned worlds). To summon him, Sora uses the Baseball Charm he receives from Merlin.

When Sora, Donald, and Goofy return to Hollow Bastion they reunite with old friends and Sora's magic instructor Merlin who re-teaches Sora some magic attacks, he then gives Sora a special baseball charm to help him along his journey. The charm summons Chicken Little who teams up with Sora and throws baseballs at enemies to stun them. Chicken Little also has a limit called FPS (First Person Shooter) Mode which allows Sora to shoot firecrackers or baseballs at enemies through a scope in a first person shooter style.

Chicken Little has not been seen in the US parks for a few years except for special events such as the Easter parade. Your best bet to meet him is at Disneyland Paris; however, even there he is a rare character.

CLU.jpg
Someone forgot their pants. 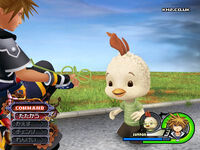 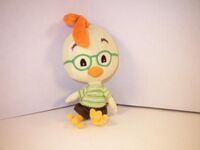 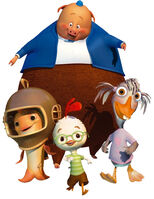 Add a photo to this gallery
Retrieved from "https://disney.fandom.com/wiki/Chicken_Little_(character)?oldid=1533870"
Community content is available under CC-BY-SA unless otherwise noted.