Light green car, with some rust along his undercarriage, and brown eyes

To wreck the World Grand Prix and to kill Lightning McQueen

"He's getting away!"
"This time I'm gonna make sure you stay dead!
"The next time he makes a stop, instead of saying 'ka-chow', he's gonna go 'ka-boom'!"
Acer is one of the secondary antagonists of the 2011 Disney/Pixar animated film, Cars 2, the other being Grem.

Acer has always felt like an outcast in the car world. The beat-up green AMC Pacer joined forces with his fellow “lemon” cars as henchmen for the devious Professor Z, whose clandestine mission is to wreak havoc at the highly visible World Grand Prix. Acer must hunt down the American and British secret agents who have stolen crucial information about Professor Z’s underhanded plot. His primary target just happens to be Mater, who has been mistaken for a spy. Acer tries very hard to be a tough guy, but he is over eager compared to his no-nonsense partner Grem.

During the climax of the film, he and Grem were beaten up by the cars from the "Ye Left Turn Inn." It is unknown what happened to them afterward.

Acer with Professor Z and Grem

Acer questioning Rod "Torque" Redline while he is being tortured

Acer and Grem about to be pummeled by angry bar patrons. 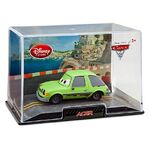 Retrieved from "https://disney.fandom.com/wiki/Acer?oldid=4119813"
Community content is available under CC-BY-SA unless otherwise noted.