“And then there was Achilles. Now there was a guy who had it all... the build, the foot speed. He could jab. He could take a hit. He could keep on comin'. But that furshlugginer heel of his! He barely gets nicked there once and kaboom! He's history.”
―Philoctetes[src]

Achilles is an an old Greek hero whom almost everyone except for Hercules has forgotten. He was once trained by Phil, but he failed due to his heel.

Achilles was the greatest Greek warrior in the Trojan War. When he was a baby, Achilles' mother dipped him in a magical river, hoping to make him immortal. But she missed the spot where she held him by his heel. And that was where he remained mortal. Having been trained by Philoctetes, the trainer of heroes was there in his success and failure, but still kept a statue of the would-be hero on his island.

When Hercules and Phil first meet, the latter talks about how he trained wannabe heroes who couldn't go the distance, leading to them admiring a statue of Achilles. Remembering how Achilles was the "guy who had it all", Phil talks about the great Greek warrior until he remembered the heel. Annoyed, Phil gave the heel of the statue a tiny flick with his finger and the whole statue crumbled to the floor. Achilles was brought up again later after Hercules completes his hero training and introduces himself to a group of Thebans, partly as an insult to Phil as a goat-man trainer of heroes. Phil brought up Achilles again when Hercules defeated the Hydra through a rockslide, which seemingly killed the young hero as well.

Following the brief backstory in the episode, "Hercules and the Living Legend" featured Achilles meeting Hercules during his teenage years of being a hero-in-training. Achilles became an old washout and the laughing-stock of Greece, being forced to keep his vulnerable heel in a protective shoe. Making a deal with Hades, Achilles temporarily gained his old body and capabilities back, with the condition of splitting Hercules and Phil. When Phil is visited by Achilles, who wins a fake battle with Memnon, the two begin to spend more time together, pushing Hercules to the side until he finally decides he no longer needs a trainer. However, Hades plan is foiled when Phil realizes he can't leave Hercules on his own and gets back together with him, so Hades returns Achilles to his grey-haired, pot-bellied former state. When Hades sends Memnon to take Hercules out, Achilles, realizing what it means to be a true hero, steps in and defeats the monster by knocking him out with his massive gut. Achilles then decides to leave to deal with the flood situation in Arcadia. 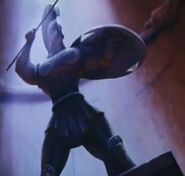 The statue of Achilles

Achilles in "Hercules and the Phil Factor".