Disney Wiki
Register
Don't have an account?
Sign In
Advertisement
in: Characters, Honey, I Shrunk the Kids characters, Disney characters,
and 10 more

Honey, I Blew Up the Kid
Honey, We Shrunk Ourselves

Daniel and Joshua Shalikar (Honey, I Blew Up the Kid)
Bug Hall (Honey, We Shrunk Ourselves)

Naps (as a toddler), Wayne wanting him to go to science camp instead of baseball camp (as a child)

Quark (dog)
Adam Szalinski is a character in Disney's 1992 film, Honey, I Blew Up the Kid and the 1997 direct-to-video sequel, Honey, We Shrunk Ourselves, which were both sequels to the 1989 film.

Adam is the youngest child of Wayne and Diane Szalinski, born during the time skip between the first and second films. In Honey, I Blew Up the Kid, he is a typical 2-year-old toddler, despising naps and often getting into trouble due to his curiosity. Much of the film's struggle comes from the fact that he only registers Wayne and Diane when they are bigger than him. In Honey, We Shrunk Ourselves, he is at around ten. Unlike Nick, who shared Wayne's scientific interest, he prefers baseball to science, though he initially doesn't know how to explain this to Wayne.

When Diane takes Amy to college, Wayne is charged with watching Nick and Adam. On Saturday, he takes them to Sterling Labs where he works, in an attempt to get one last test run of his latest invention, the growing machine. During the test, Adam unknowingly escapes from his stroller and wanders into the machine's path. While nothing seems to happen at first, it is later seen that he grows when in close contact with the electromagnetic energy given off by electric devices.

Though Wayne first attempts to return Adam to the lab to reverse the process, the presence of his coworker, Dr. Charles Hendrickson, who had been trying to take over his project, forces them to return home. By this time, Diane has returned and is shocked to see that Adam is now over 7 feet tall. Nick builds a park for him and gives him 12 ice cream bars. While Wayne and Diane go to the warehouse to get the former's shrinking machine, Adam grows again to 14 feet tall while watching TV and escapes through the walls, forcing Nick and his girlfriend, Mandy Park, to try to find him. They're captured by Dr. Hendrickson, who reports them to his boss, Clifford Sterling, and engages law enforcement to track Adam down.

Adam grows again, this time due to being near electric wires. He escapes from the truck carrying him and then mistakes Nick and Mandy for toys and puts them in his overalls pocket before taking them with him. He eventually ends up in Las Vegas, where he wanders around the Strip, thinking it's a playground.

By this time, Wayne and Diane have come to town with the machine, assisted by Sterling, who has fired Dr. Hendrickson and offers them his support. Meanwhile, Adam, now 112 feet tall, approaches the Hard Rock Cafe and rips the guitar off its sign. An initial attempt to make him stay still by lulling him to sleep fails. After this, Dr. Hendrickson, angry at being fired, attempts to shoot him with tranquilizers. The first shot misses him, but the second hits the guitar, giving him a painful electric shock, to which he starts crying. Luckily for him, Diane intervenes, temporarily enlarged due to the machine, and holds him, keeping him still long enough for Wayne to shrink them both, returning him to normal size.

Adam, now ten, has developed a love for baseball in contrast to Wayne's and Nick's love of science and invention. However, Wayne wants to send him to science camp, and he had trouble making him understand his preferences.

When Diane and Patti prepare to go on a vacation, Adam is meant to stay at home with Wayne, Gordon, Jenny, and Mitch. When the kids are sent to buy groceries, Wayne accidentally shrinks himself and Gordon while secretly trying to shrink a Tiki Man statue Diane wants to throw out. When Diane and Patti return to drop off Mitch's medicine, they are also shrunk. When Adam, Jenny, and Mitch return home, they believe Diane and Patti to be on vacation. Meanwhile, an undeleted voicemail message leads them to believe that Wayne and Gordon have left unexpectedly to see a shuttle launch. While the adults try to get their kids' attention, they, thinking they have the house to themselves, invite friends over for a party.

During the adults' attempts, Wayne overhears Adam's desire to go to baseball camp rather than science camp and comes to understand his interests better. Later on, Mitch becomes ill from potassium deficiency (as he was unable to find the medicine Patti had left for him). Adam is able to save him when he remembers Wayne telling him that bananas have potassium in them. When Adam's friends ask how he knew about chemicals, he replies that, although he is unlike Wayne, he can't help understanding a few facts about science thanks to Wayne's lessons.

When the adults finally get their kids' attention, Adam, Jenny, and Mitch are able to get the machine ready, thanks to Wayne's instructions. They briefly contemplate leaving their parents shrunk after Adam mentions the idea, but soon decide against it.

After being returned to normal size, Wayne and Diane apologize to Adam for not listening to him when he said he didn't want to go to Camp Isosceles, as well as failing to realize his interests were different. Wayne then pays for him to go to a baseball camp. He is last seen with Wayne and Diane returning home from it. 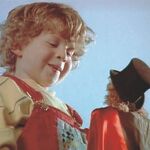 An older Adam in Honey, We Shrunk Ourselves