William West Anderson, better known by his stage name Adam West, was an American actor and voice actor, who is best known for his role as Batman on the ABC television series of the same name and in the 1966 feature film. He reprised his role in two animated featured films: Batman: Return of the Caped Crusaders and Batman vs. Two Face, making Batman not just his most famous role, but also his very last one. He is also known for voicing fictionalized versions of himself on the animated series Family Guy on Fox and The Fairly OddParents on Nickelodeon. He even guest starred on a number of television Westerns.

West took on eccentric roles, and many parodies of his Batman role and of himself, including several Disney roles. 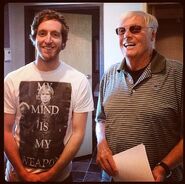 Adam West with Thomas Middleditch.
Add a photo to this gallery

Retrieved from "https://disney.fandom.com/wiki/Adam_West?oldid=4247596"
Community content is available under CC-BY-SA unless otherwise noted.