Adewale Akinnuoye-Agbaje is an English actor, voice actor, and former fashion model who is best known for his film roles as Lock-Nah in The Mummy Returns and Nykwanna Wombosi in The Bourne Identity and for his television roles as Simon Adebisi on the HBO crime drama suspense series Oz from 1997 to 2000 and Mr. Eko on the ABC television series Lost from 2005 to 2008.

For Disney, he played Algrim the Strong/Kurse in the 2013 Marvel action film, Thor: The Dark World. He also provides the voice of the blacksmith Xavier in Tangled: The Series. He even plays Sevvy Johnson in the ABC TV show, The Fix. 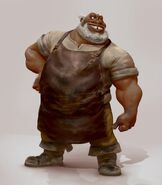 Xavier
(Tangled: The Series)
Add a photo to this gallery
Retrieved from "https://disney.fandom.com/wiki/Adewale_Akinnuoye-Agbaje?oldid=3936318"
Community content is available under CC-BY-SA unless otherwise noted.