Admiral Gial Ackbar is a character in the Star Wars universe. A member of the amphibious Mon Calamari species, Gial was the foremost military commander of the Alliance Fleet who led major combat operations against the Galactic Empire and was later integral in the formation of the New Republic. Gial played a supporting role in the 1983 film, Return of the Jedi, and later became a prominent character in the novels, comic books, and other media of the Star Wars Expanded Universe. He also played a role in Star Wars: The Clone Wars.

With his distinctive salmon-colored skin, high-domed head, and large fish-like eyes, Gial was realized in Return of the Jedi through the use of a half-body puppet and slip-on mask, depending on the camera angles used. He was portrayed in the film by puppeteer Timothy M. Rose, who asked to play the part after he was impressed with a sculpt of the puppet. Gial was voiced by Erik Bauersfeld, who made up the voice he believed matched the character after looking at a photo of Ackbar.

The Ackbar character has been received positively by critics and fans. The line "It's a trap!", which he says after realizing the Death Star's shield has not yet been deactivated in Return of the Jedi, was one of the most popular lines from the Star Wars films and became a popular Internet meme in spite of Ackbar's general unimportance to the series' narrative.

Gial Ackbar was once the captain of the guard for the Mon Calamari kings Yos Kolina and Lee-Char, and fought alongside Anakin Skywalker, Ahsoka Tano, Padme Amidala, Captain Rex, and Jar Jar Binks during the Battle of Mon Cala during the Clone Wars. After, during the advent of the Galactic Civil War, Ackbar became one of the greatest leaders and tacticians of the war, and was instrumental in a successful attack on the Second Death Star that resulted in the destruction of Palpatine and a vast majority of his loyalists. Perhaps his greatest accomplishment during this battle was his orchestration of the destruction of the Super Star Destroyer Executor, flagship of the Imperial Navy, causing the starship to crash into the Death Star. Ackbar would later retire to Mon Cala with the rise of the New Republic, but was called back into service by his old friend Leia Organa, who realized that the First Order was a greater threat than had been realized by the New Republic.

Gial is very loyal and faithful to his cause. He is also intelligent, as he is highly strategic and tactical. He attributes a lot of wisdom, one of the qualities that makes him a good leader. He is also very brave.

Ackbar is in command of the Alliance Navy from his flagship, the Mon Calamari Cruiser Home One, when the Rebellion gathers for their briefing on taking down the Death Star II, especially once Rebellion founder Mon Mothma reveals that the Emperor will be on-board the battle station, meaning killing him would be the death knell for the Galactic Empire. Upon her passing the briefing over to him, Ackbar explains how the second Death Star currently orbits the forest moon of Endor and is protected by an energy shield generated from the moon, meaning the shield must be deactivated or destroyed to allow for an attack on the battle station, with the Alliance Navy forming a perimeter with their larger ships while the fighters enter the superstructure and destroy the second Death Star's main reactor, which would obliterate the entire battle station. Ackbar then reveals that recently-promoted General Lando Calrissian will lead the fighter force before passing things over to General Crix Madine regarding the Rebel strike team that will go down to the forest moon and take out the shield generator using a stolen Lambda-class Imperial shuttle the Rebellion recently acquired under the command of General Han Solo.

Some time later, Lando, in the Millennium Falcon, with his co-pilot Nien Nunb and a Rebel crew to handle other operations on the freighter, reports in to Ackbar that the fighter force is ready to make the jump to hyperspace to head for the Death Star II.

“All craft, prepare to jump into hyperspace on my mark.”
―Admiral Ackbar

On Ackbar's order, Lando engages the hyperdrive on the Falcon, and shortly after the Falcon and the fleet of X-Wings, Y-Wings, A-Wings, and B-Wings with it leap into lightspeed, Home One and the Alliance Navy follow shortly thereafter. Within a short period, they drop out of lightspeed to find the Death Star II looming directly ahead of them, meaning that the Rebellion's moment of triumph in delivering a devastating blow to the Empire has come.

“May the Force be with us.”
―Ackbar

Unfortunately, Lando learns from Nien that the Rebellion's scanners are being jammed, leading Lando to realize that the Empire was waiting for them the whole time and the Alliance has been lured into a trap. Lando calls off the fighter attack as Ackbar tries to maintain command of the crumbling situation, but soon learns things just went from bad to worse...

“Admiral! We have enemy ships in Sector 47!"
"It's a trap!
”
―Mon Calamari crewman and Ackbar

The Imperial Navy's Death Squadron, led by the Executor-class Star Dreadnought and flagship Executor under the command of Imperial Admiral Firmus Piett, is waiting for the Alliance Navy and unleashes its fleet of TIE Fighters and TIE Interceptors against the Falcon and Rebel fighters. Then things really get bad for the Rebellion when one of the large Mon Calamari cruisers, the Liberty, is destroyed by, of all things, the superlaser of the Death Star II, causing Lando and Ackbar to realize that the Death Star II is fully operational. The Emperor has lured them into his trap to destroy the Alliance to Restore the Republic and win the Galactic Civil War once and for all. Ackbar orders the fleet to prepare to retreat, but Lando advises that if they flee, they won't have another chance to take down the Emperor while he's on the Death Star II. Although Ackbar explains none of their ships can repel the magnitude of firepower the superlaser packs, Lando refuses to retreat, having faith that Han will get the shield down in time and they need to give him that time to do so.

In a desperate bid to buy Han and his strike team more time, Lando has Ackbar move the Alliance Navy into engaging the Imperial Navy in ship-to-ship combat at point-blank range, gambling that the Death Star II won't fire its superlaser at the Rebel ships under chances of hitting an Imperial vessel instead. The stalling tactic works, as word soon comes in that the Death Star II has lost its shield, meaning Han and his strike team have destroyed the generator. While Lando takes Wedge Antilles and what surviving fighters are left to take out the main reactor of the Death Star II, Ackbar orders all firepower focused on the Executor, knowing that taking out the flagship will throw the Imperial Navy into disarray. After one Rebel pilot sacrifices his own life to crash his out-of-control A-Wing into the bridge of the Executor, killing Admiral Piett and the bridge crew, Ackbar breathes a sigh of relief as his own crewmen cheer at having sunk the Imperial flagship.

When word comes that the main reactor of the Death Star II has been severely damaged and compromised by Wedge and Lando, and the battle station is going to explode, Ackbar orders the surviving ships of the Alliance Navy to retreat from the area and head for the forest moon of Endor, making it safely out of range before the battle station explodes, signaling the end of the Empire as the Battle of Endor has cost the Empire severely, having lost the Emperor, Darth Vader, the Executor, the Death Star II, and thousands of Imperial men and materials. Losses the Empire would never recover from.

With the Rebellion victorious, Ackbar travels down to the forest moon to celebrate with his fellow Rebels and the local residents of the forest moon, the Ewoks, at Bright Tree Village.

Ackbar meets with the Resistance to discuss Starkiller Base. When the Death Star's size is compared to that of Starkiller Base, Ackbar is stunned and asks how it is possible to power such an enormous weapon. Poe Dameron speculates it requires a thermal oscillator which turns out to be true. The base is later attacked.

Ackbar aids the rest of the Resistance in evacuating their base. He orders the ships to jump to hyperspace and escape the First Order. The First Order fleet pursues the Resistance and initiates an attack on the bridge of their main cruiser, causing all occupants, including Ackbar, to be blown out into space and killed, leaving general Leia Organa as the sole survivor. Ackbar's death is not directly revealed until Commander D'Acy lists the casualties during a meeting later on. 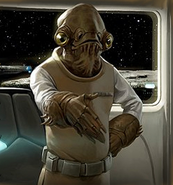 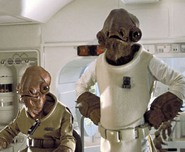 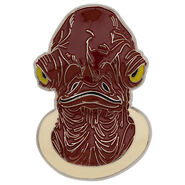 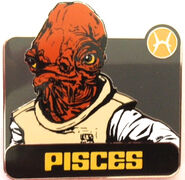 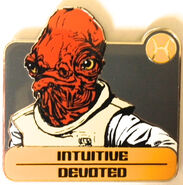 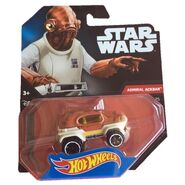 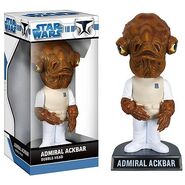 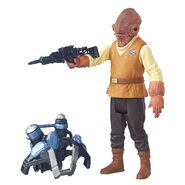 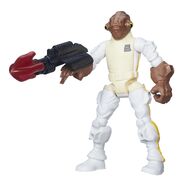 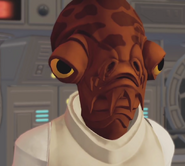