Disney Wiki
Register
Don't have an account?
Sign In
Advertisement
in: Characters, Character stubs, Miles from Tomorrowland characters,
and 11 more

Active
Admirals Watson and Crick are a two headed alien who appear in the Disney Junior series Miles from Tomorrowland.

Watson and Crick are the Admirals at Tomorrowland Transit Authority who often seen briefing the Callisto family on new assignments or giving them new upgrades to their Questcoms. They are known to quarrel with each other. Crick is the head on the left, with messier hair. He is the more mischievous of the two heads and likes to mess around and doesn't always do what he is supposed to do. His voice is higher pitched. Watson is the head on the right, with tidier hair. He is the more mature of the pair and his voice is lower-pitched. He is often annoyed by Crick's immaturity. 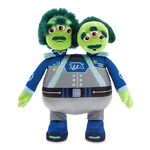 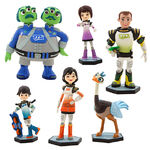