To be the top fashion designer in Starland

Fashion, scientific experiments, thinking of ways to improve the world

Adora is one of the twelve Star Darling students at Starling Academy and also one of the supporting characters and protagonists in Disney's Star Darlings.

No detail is too small for Adora. She loves analyzing and examining everything. She’s cool, clearheaded, and also has stellar style. Whether she is trying to create a new sparkly fabric or stardust eyeliner, Adora is dedicated to the science of fashion!

If there was one word to describe Adora, it would be logical. With a calm mind and laser focus, she analyses the world around her with facts and reason, the tools she uses to make it better. Adora is also rather introverted and at her happiest when she can be alone, conducting chemistry experiments, creating cutting edge fashions, or a little of both! Although a kind and polite girl, Adora's preference for cold, hard logic makes her aloof, unable to empathize, and annoyed when her peers think with their hearts instead of their heads. 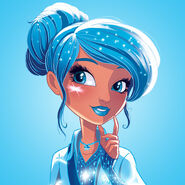 Retrieved from "https://disney.fandom.com/wiki/Adora?oldid=3949508"
Community content is available under CC-BY-SA unless otherwise noted.