Israel Houghton (2016-present)
Adrienne Eliza Houghton (née Bailon) is an American actress, singer-songwriter, dancer, and television personality, most renowned for her role as Chanel Simmons in the popular Disney Channel film series, The Cheetah Girls, and for being one of the three members of the former music group of the same name.

She is also known for competing in the Fox show, The Masked Singer under the Flamingo alias.

In 2002, Bailon was given the role of Chanel Simmons in the Disney Channel Original Movie, The Cheetah Girls, starring alongside Raven-Symoné, Sabrina Bryan, and Kiely Williams.

The success of this film led to the release of two sequels, the first in 2006 and the final in 2008, in all of which Bailon reprises her role as Simmons.

In 2003, Bailon starred as Chanel Simmons in the Disney Channel Original Movie, The Cheetah Girls. Bailon later reprised her role in the film's following two sequels, The Cheetah Girls 2 and One World. She also played Domino in Buffalo Dreams.

Later in 2003, Bailon landed a recurring role as Alana Rivera in the Disney Channel Original Series, That's so Raven, on which her Cheetah Girls co-star, Raven-Symoné, played the title character.

In 2008, Bailon made a guest appearance as herself on the Disney Channel Original Series, The Suite Life of Zack & Cody, accompanying her fellow Cheetah Girls members. Currently, she and Tamera Mowry are co-hosts of the Fox syndicated talk show, The Real, alongside Jeannie Mai, Loni Love, and Amanda Seales. 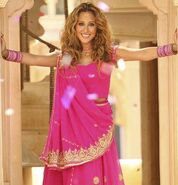