For the Disneyland Park (Paris) attraction of the same name, go to Adventure Isle

“Far beyond the known world, hidden deep within the ocean's mist, is a place where the journey is into the unknown, the unfamiliar, the mystical and the magical... this is Adventure Isle.”
―Shanghai Disneyland Magic Passport

Adventure Isle is a themed area at Shanghai Disneyland. Just like "Adventureland" at Disneyland Paris, it does not feature a Jungle Cruise attraction, and instead features "Roaring Rapids", and "Soarin' Over The Horizon".

The land is focused around the base camp of a group known as the League of Adventurers located near the village of a friendly tribe of natives known as the Arbori. The League first arrived in the area in 1935, when an expedition was blown off course and landed in their jungle. With the scientists peaceful intentions and fascination with the land's culture and environments becoming clear, the Arbori welcomed them and explorers have been arriving ever since.

The main feature of the land is Roaring Mountain, known as Apu Taku in the local language. Expeditions into the mountain can be taken through Roaring Rapids by raft or the rope courses at Camp Discovery. 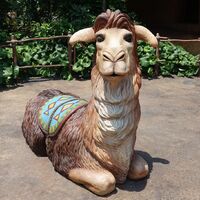 Photo-Op figure with a llama-like creature called a Wooley