This article is about the episode from Chip 'n Dale Rescue Rangers. For other episodes, see Adventures in...Sitting.

"Adventures in Squirrelsitting" is the seventh episode of Chip 'n Dale Rescue Rangers. It aired on April 9, 1989.

While trying to recover the stolen Maltese Mouse from Fat Cat, the Rangers accidentally wreak havoc in the home of a squirrel with two daughters. While the mother repairs the damage, the Rangers take care of the girls. The eldest, Tammy, develops a crush on Chip, sparking a rivalry with Gadget. She decides to prove herself to her hero by sneaking into Fat Cat's hideout and recovering the priceless statue herself. 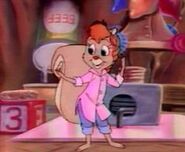 Retrieved from "https://disney.fandom.com/wiki/Adventures_in_Squirrelsitting?oldid=3904281"
Community content is available under CC-BY-SA unless otherwise noted.