March 23, 1992 – 1995
Adventures in Wonderland is a live-action musical comedy television series based on Walt Disney's animated classic Alice in Wonderland. In the series, Alice (played by Elisabeth Harnois), was portrayed as a girl who can go to and from Wonderland simply by walking through her mirror (a reference to Wonderland's source material Lewis Carroll's Through the Looking-Glass).

The show originally ran from March 23, 1992 to 1995[1] (with reruns continuing until at least 1998[2]) on The Disney Channel and on stations across the country. Like many Disney Channel original shows, it was taped at Disney's Hollywood Studios at the Walt Disney World in Lake Buena Vista, Florida, with two sound stages used exclusively for it, but only for its first 40 episodes. Afterward, shooting was moved to Los Angeles, California.[3][4]

On April 30, 2021, the series became available on Disney+ with the exception of the episode "White Rabbits Can't Jump".

Walt Disney Studios Home Entertainment released only three VHS tapes of certain episodes, however, there are currently no plans to release it on DVD.

Usually, the format consisted of Alice coming home from school and talking to Dinah (her cat) about a problem facing her that day, then going into Wonderland and finding the residents of that world facing a similar crisis. At the end of each episode, she would return to the real world with a solution to her problem. In some cases, she would have a problem with her brother, Brian, or sister, Kathy, a friend, or some other dilemma, and by the show's end, she would know how to deal with it. In "To Tear Is Human," she learns a lesson in humility when she splits her pants in the middle of a charades game, making her not so quick to laugh at other people's misfortune. (Earlier in the episode, she had laughed at another student for dropping his lunch tray.)

In almost every episode, Caterpillar would tell a fable, done in a clay setting, by Will Vinton Productions' Jeffrey Bost, Barry Bruce, Paul Diener, and John Logue. In some occasions, a story would be reused in a future episode. 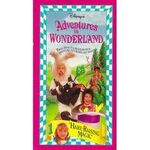 Adventures in Wonderland Video 1: Hare-Raising Magic. With episodes "Off the Cuff" and "For Better or Verse" 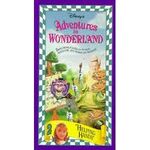 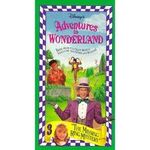 Adventures in Wonderland Video 3: The Missing Ring Mystery. With episodes "Pretzelmania" and "Noses Off"

Print advertisement of the show.