Disney Wiki
Register
Don't have an account?
Sign In
Advertisement
in: Article of the week, Television series by Disney, Adventures of the Gummi Bears,
and 6 more
English

The Adventures of the Gummi Bears

Adventures of the Gummi Bears is an American animated television series that aired in the United States in the mid-1980s through the early 1990s. The series was the first animated production by Walt Disney Animation Television, and loosely inspired by gummi bear candies; Disney CEO Michael Eisner was struck with inspiration for the show when his son requested the candies one day. The series premiered on NBC on September 14, 1985, and aired there for four seasons. The series moved to ABC for one season from 1989 to 1990 as a part of Disney's Gummi Bears/Winnie the Pooh Hour, in which it would be paired with The New Adventures of Winnie the Pooh, and concluded on September 6, 1991 as part of The Disney Afternoon. Of the series' 67 shows, 30 were double-features, consisting of two 11-minute cartoons, thereby bringing the series total to 97 distinct episodes overall. The show is well-remembered for its theme music, written by Michael and Patty Silversher.

The series was later rebroadcast on the syndicated Disney Afternoon block, and rerun on the Disney Afternoon through the summer of 1991. In later years, it was shown in reruns on the Disney Channel and Toon Disney, with its most recent televised airing occurring on Toon Disney on December 28, 2001. Seasons 1 to 3 of the series were released on DVD on November 14, 2006. Presently (2020) all seasons are available on Disney+.

The series focuses on the escapades of the eponymous "Gummi Bears," anthropomorphic bears who are the last remnants of a once-great civilization of Gummies that fled the land centuries ago when humans, jealous of the advancements and magical skills of the Gummi Bears, forced the species into exile. Now regarded by most of humankind as fairytales, the show's main cast of Gummi Bears (six in number at the outset of the series, increased to seven during the third season) live in the vast subterranean warren of Gummi Glen in the medieval kingdom of Dunwyn.

The Gummies' modern adventures begin when they are discovered by a human boy named Cavin who happens to have a Gummi Bear Medallion, found by his grandfather many years earlier. After he accidentally enters the colony's underground home of Gummi Glen, they capture and interrogate the boy as to how he gained the medallion. During the questioning, Cavin escapes after one of the bears inadvertently gives him Gummiberry Juice to drink, but refuses to cause any harm and attempts to befriend the reclusive bears. Impressed by this civilized behavior, they make him swear to keep their confidence and make him a privileged friend of the colony. The medallion helps their eldest bear to magically unlock the colony's Great Book of Gummi, an essential reference guide to the forgotten knowledge of the Gummi Bears. Inspired by its writings, the colony resolves to rediscover their heritage and help Dunwyn defend against evil. Later, another human from Dunwyn accidentally learns that the Gummi Bears are real: the young daughter of the king, Princess Calla. She also promises to keep the Gummies' existence a secret. In subsequent seasons, the Gummies would befriend or be discovered by other friendly humans.

The main antagonist of both Dunwyn and the Gummies is Duke Sigmund Igthorn, a renegade noble with an army of Ogres, from the neighboring province of Drekmore. Unfortunately, in stopping Igthorn's attempt to bombard his enemies with a grand catapult, the Gummi Bears alert him to their presence. Igthorn will stop at nothing to discover and exploit their secrets to become invincible and capture Dunwyn Castle. Chief among his primary goals is gaining a reliable supply of the Gummi Bears' vital strategic substance, Gummiberry Juice, a magic potion that endows Gummi bears with bouncing abilities, but gifts humans (or Ogres) with momentary super-strength as well as other numerous uses, including serving as fuel for machines.

In addition to combating Igthorn's ambition, the Gummies regularly encounter other evil humans and magical beings ranging from wizards to gods, all the while attempting to hide their existence from the world at large. One of the show's main recurring storylines outside of the schemes of Igthorn is the mystery of the ancient Gummies, who are now scattered all across the world, but who have left advanced technology behind, like the vast underground network of Quick Tunnels and their Quick Cars, or the Gummiscopes.

Gummiberry Juice is a concoction formulated using gummiberries by the Gummi Glen Gummi Bears, with the recipe being held by women such as Grammi Gummi, and later on Sunni Gummi. The juice is produced by adding 6 handfuls of red berries, then 4 orange ones, three purple, 4 blue and 3 green and a yellow berry, among other undisclosed ingredients. The recipe ends with the 3-step-stir: first stir slow to the right, then slow to the left, then bang the pot to get out the bubbles. The juice when consumed has varied effects depending on the species or race that consumes the juice.

Gummi Bears gain the ability to bounce at unusual heights for a limited amount of time. Ogres and humans both gain super strength for a similar amount of time. Drinking too much Gummiberry Juice have an unforeseen side effects on the consumer, and it appears that the abilities gained from drinking the juice only can be used once per day. Also if the juice is produced inaccurately from the recipe the results are explosive outcomes, though nothing fatal.[1]

In the series, the Juice was used a major plot device with the main reoccurring villain Duke Igthorn trying get the juice or the recipe to create mass amounts to make a huge super strength army of Ogres. Another reoccurring theme was the Gummi Bears, or their companions, using the juice to fight off Duke Igthorn and other villains.

Outside the series, Gummiberry Juice also played a minor role in the DuckTales reboot episodes "From the Confidential Casefiles of Agent 22!" and "The Last Adventure!"

On November 14, 2006, Walt Disney Studios Home Entertainment released Disney's Adventures of the Gummi Bears: Volume 1 on DVD in Region 1. The 3-disc set features seasons 1-3 and does not contain any bonus features.

Various countries outside of the US have released VHS copies of episodes from the series.

Disney's Adventures of the Gummi Bears was Disney's first major serialized animated television series (it was aired back to back with another show, The Wuzzles, which lasted only 13 episodes), and is often credited by animators and animation historians as having helped jump start the television animation boom of the mid-1980s and 1990s. This was partially because unlike competitors like Hanna-Barbera and Filmation, Disney as a multi-media conglomerate could drawn upon its considerable financial resources for a lavish production budget for television for this series, gambling that they could profit in syndication.

Consequently, it also became the forerunner to Disney's famous Disney Afternoon timeslot, which gave way to other famous serialized Disney television series, such as DuckTales, Chip 'n Dale Rescue Rangers, TaleSpin, Darkwing Duck, Goof Troop, Bonkers and Gargoyles. Although many of these subsequently-created shows exceeded Gummi Bears in budget and length, it is often credited as the sort of prototype to all of the subsequent animation which followed it, with DuckTales really jumpstarting the trend with competitors forced to either raise their artistic standards to compete like Hanna-Barbera or inspire new competitors of equivalent corporate size to enter the field with similar financial commitments such as Warner Bros.

Additionally, while not having the largest number of total episodes, Gummi Bears has the biggest number of seasons of any Disney animated series. Whereas other shows simply produced large numbers of episodes for each of their seasons (DuckTales, for instance, had 100 episodes over three years), Gummi Bears is unique in that it was actually annually renewed for new episodes over six consecutive years, a feat which few other children's animated series can boast even today.

The show was so successful in the United Kingdom that the episodes "A New Beginning" and "Faster Than a Speeding Tummi" were released as theatrical featurettes there in 1986 and 1987. Other appearances of Gummi Bears in other media included one appearance of Gruffi Gummi starring in a D-TV music video of the Elvis Presley song "Teddy Bear" in 1986.

The show's popularity also led to a re-theming of Disneyland's Motor Boat Cruise, along with a small part of Disneyland that became known as "Disney Afternoon Avenue." The Motor Boat Cruise became the "Motor Boat Cruise to Gummi Glen" and plywood characters from the show made Gummiberry Juice along the waterway. The Gummi Bears, and on occasion human characters such as Duke Igthorn, Princess Calla, or King Gregor, have also been featured as meetable characters who greet guests in Disney theme parks. However, all of the characters from the show have not made any appearances for many years and are now retired.

A comic strip based on the TV show (featuring just the Gummi Bears themselves) was produced from 1986-1989. The Sunday strips would have a fun fact and activity along with the actual Sunday strip. Some of the comics would be rereleased in 2021, as part of the book Darkwing Duck: Just Us Justice Ducks: Disney Afternoon Adventures Vol. 1.

Animation production for the sixth and final season was distributed among several different studios, which resulted in noticeable style changes. While Walt Disney Animation Japan, Inc. is still credited responsible for the production of nearly half the season, those episodes were mainly animated by the South Korean studios Taesang Ind. Co., Ltd (8 episodes), and Hanho Heung-Up Co., Ltd ("Toadie the Conqueror", shared production with Taesang Ind. Co., Ltd), Brazil's Guimaraes Productions (the half-episode segment "Friar Tum"), and China's Jade Animation Productions Limited (the series finale "King Igthorn, Part II"). The episode "Thornberry to the Rescue" is credited to Walt Disney Animation Japan, Inc., but differs in style as well, likely due to the uncredited studio Big Star being involved. The remaining 8 episodes of the sixth season were animated by the studio Walt Disney Television Animation Australia.

Early storyboard for the pilot episode 1/7

Early storyboard for the pilot episode 2/7

Early storyboard for the pilot episode 3/7

Early storyboard for the pilot episode 4/7

Early storyboard for the pilot episode 5/7

Early storyboard for the pilot episode 6/7

Early storyboard for the pilot episode 7/7

Quilt in the Library 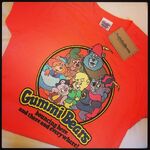