The Crimson Wing: Mystery of the Flamingos

Wings of Life
African Cats is a nature documentary film directed by Keith Scholey and Alastair Fothergill about several lions and cheetahs trying to survive on the African savannah. The film is the fourth release by Disneynature, and was released in theaters on Earth Day, April 22, 2011. The film is narrated by Samuel L. Jackson (Patrick Stewart in the U.K. release) and features the song "The World I Knew" by Season Six American Idol winner Jordin Sparks. A portion of the proceeds for the film were donated to the African Wildlife Foundation and their effort to preserve Kenya's Amboseli Wildlife Corridor. The film's initiative with the African Wildlife Foundation is named "See African Cats, Save the Savanna," and as of May 2, 2011, ticket sales translated into 50,000 acres of land saved in Kenya. It is similar to National Geographic's documentary film The Last Lions.

African Cats, referred to as a "true life adventure", tells the true story of two animal families in the wild by using real-life footage. The film focuses on a young lion cub named Mara being raised by her mother, Layla, a mother cheetah named Sita who is raising five newborns, and Fang, the leader of Mara and her mother's pride defending his family from a banished lion. With so many species competing for space and food in the savannah, the animals must figure out the best way to survive.

The film begins by introducing Sita, a cheetah in the Masai Mara, in Africa. She has just given birth to five cubs. Although cheetahs are solitary by nature, Sita now has her cubs to take care of, and teach before they each go their own way. Then we see Mara, a six-month-old lion cub with her mother Layla, who both belong to the river pride. The pride's leader is Fang, an older lion who has a distinctive broken tooth thanks to an earlier fight. In the north of the Masai Mara, where Sita is caring for her cubs, another pride of lions is led by Kali, who wants to expand his pride by taking over Fang's southern pride. However, they cannot reach the southern pride as they are divided by a crocodile infested river. Sita's cubs are beginning to run and play when Kali and his four sons are on patrol. Sita, seeing it as a danger to her cubs, goads Kali and his sons so as to get them tired and away from her cubs. However, after the confrontation, the cubs have scattered. Sita calls for her cubs throughout the night, and as it gets darker, other predators are seen and heard. In the morning, three of the five cubs have returned to Sita. Although she continues to call to them, it is known that the remaining cubs were taken by the hyenas.

Meanwhile, Layla is injured by the kick of a zebra during a hunt. As the wildebeest begin to migrate to greener pastures, so does the river pride. However, due to her injury and her older age, Layla has trouble keeping up. Mara stays beside her mother and helps on her way. Soon though they begin to lose track of the pride. Knowing that Mara needs the pride, Layla forces through her injury, and they soon find themselves with the river pride once more.

As time passes, Sita's cubs have grown more, and begin to show more of their cheetah nature. One day, three older Cheetah brothers roaming about zone in on Sita. Again, Sita finds herself having to divert attention so that they do not find her cubs. However, being fellow cheetahs, they do not tire as easily as lions and soon the brothers have separated Sita from her cubs. As they circle the cubs, the cubs stand their ground and hiss at the bullies, but before the older cheetah brothers can do anything, a passing elephant chases them away.

Some time later, the river that separates the river pride and the northern pride has lessened enough so that Kali and one of his sons can cross. They head towards the river pride and Fang, seeing Kali and his son approach, runs away. Knowing that Mara would be killed by Kali, Layla stands up to Kali and tries to run him off. Seeing what Layla is doing, the rest of the lionesses fight back against Kali and his son, successfully running out Kali. Fang returns to his pride and life begins as usual for the pride.

However, Layla was injured even further during the fight. Seeing that she might not make it, for Mara's sake she goes to her sister Malaika, who has cubs of her own and reconnects with her so as to maintain a spot for Mara on the pride. Once she sees that Mara will be accepted by her sister, Layla slips away from the pride to find a nice quiet place. After she finds it, she is seen lying down, having died.

As more time goes by, Kali returns with his four sons in tow. Although his sons have shown signs of betraying their father with ideas of dethroning him, Kali is still strong and shows them who wears the crown. As they return to take over, Fang runs away, never to be seen of again.

Kali takes over the pride, and runs off Fang's cubs including Mara. Her male cousins are seen as a threat to Kali, so he and his sons hunt them down. Seeing that they can no longer stay in the south, they cross the river. But the river has grown since Kali crossed, and the crocodiles are a threat. As they near the north, one of the male cubs is nearly caught by the crocodiles. But they both reach land unscathed. The lionesses refuse Kali as their leader, the wound of losing their cubs still fresh in their minds.

Mara, banished by her pride, tries to live on her own. However, she was banished before she was taught to hunt and finds her first attempts at catching meals, even a small warthog, unsuccessful. She learns that there are benefits in belonging to a pride.

Soon the wildebeest return, and the lionesses begin to hunt for their new cubs, Kali's offspring. Mara successfully hunts and feasts. Soon after she proves herself to the pride and is welcomed back. Meanwhile, Sita and her cubs, who are now young adults, have been having a tranquil time. Sita begins to prepare her cubs by teaching them to hunt. They practice on a serval and a jackal. Then they encounter Kali's pride and learn to avoid and outrun lions. Sita, seeing that her cubs are ready to forge their own path, leaves them and returns to the solitary life of a cheetah.

At the end of the film, the narrator (Samuel L. Jackson/Patrick Stewart) shows Mara and Sita's cubs as an example of a mother's love.

A trailer for the film has appeared in several movies. Some prints of the movie contain the short "Mordecai and Rigby: Ringtoneers". The first trailer aired on Beauty and the Beast: Diamond Edition.

The families of the animals in African Cats were filmed on the Maasai Mara National Reserve, a major game region in southwestern Kenya. The Maasai Mara is one of the few remaining places in Africa where lions, cheetahs and leopards live in large numbers and in close proximity. To help achieve scientific accuracy, the directors recruited Dr. Sarah Durant of the Zoological Society of London. Durant worked in Tanzania for the last 19 years, studying cheetahs and working toward the conservation of all of Africa’s large carnivores. The film is narrated by Samuel L. Jackson.

The film has received generally positive reviews from critics. Based on 68 reviews collected by Rotten Tomatoes, the film has an overall approval rating of 71% with an average rating of 6.2/10. Its consensus states "It's isn't quite as majestic as its subjects, but African Cats boasts enough astounding footage -- and a big enough heart -- to keep things entertaining." Another review aggretator, Metacritic, calculated an average rating of 63 based on 18 reviews.

The film was released as a Blu-ray/DVD combo pack and movie download on October 4, 2011 (the same day as The Lion King Diamond Edition Blu-ray/DVD combo pack). The DVD version of the release includes the "Disney & Nature" and "Save the Savanna" bonus features, while the Blu-ray version additionally includes the music video for "The World I Knew" by Jordin Sparks and a behind-the-scenes extra called "Filmmaker Annotations." The movie download version includes the two bonus features from the DVD, plus three segments from the "Filmmaker Annotation" Blu-ray extra. Disneynature will also donate a portion of the home media proceeds earned through October 10, 2011 to the African Wildlife Foundation's "Save the Savanna" initiative.

The film earned $3.3 million on its opening day, which was just short of Earth's $4.1 million start and was the third-highest grossing opening day for a documentary film. However, Friday accounted for 55% of its opening weekend, as it set the record for the highest Friday percentage share for a movie, and grossed just over $6 million for its opening weekend, ranking in sixth place with a per-theater average of $4,921 from 1,220 theaters. The opening was the same as Disneynature's previous film, Oceans. As of July 14, 2011, the film's gross stands at $15,428,747.

"The World I Knew" is a song performed by American recording artist Jordin Sparks, and serves as the theme song of African Cats. The song was written by Ryan Tedder and inflo who also produced the song. It was released by Walt Disney Records as a digital download on April 12, 2011 on iTunes and amazon.com. The film also features music by composer Nicholas Hooper; Hooper's soundtrack to the film was chosen as one of the 97 Original Scores eligible for a nomination at the 84th Academy Awards in 2011.

Jordin describes the song as being about "everybody having a path they have to take but when you have that one person next to you or a few friends, if you have your family with you pretty much you can face another day, you can get through any obstacle and you can make it through anything."

The song's music video was shot in In Burbank, California. The video places Jordin in a surreal world of sparkling butterflies and magic waterfalls, as she sings about eternal love. Viewers also get to see footage from the movie, including scenes involving lion and cheetah cubs. The video premiered on Disney Channel on April 2, 2011 during The Suite Life Movie and played at the end credits of the film. 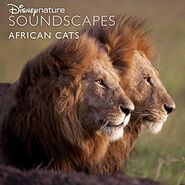