Amphibia
"After the Rain"

"After the Rain" is the second segment of the thirty-third episode of Amphibia. It aired on March 13, 2021.

Anne gets a letter from Marcy saying that she is ready for them to head out together to the first temple. She is told to bring four things with them: food, weapons, armor (which Hop Pop made by simply using inflated fabric), and finally the music box. Hop Pop is horrified at this news, but tells Anne that he will retrieve it from his contacts before they leave on their mission. In the middle of the night, Anne, too excited to sleep, hears Hop Pop get up in the middle of the night and head outside. She decides to surprise him, but it turns out that he was digging for the Calamity Box under the tree. Realizing that it is gone, Anne is shocked by what she has just heard. Hop Pop attempts to explain, but an angry and confused Anne believes that he was trying to keep her there and she storms off into the woods.

In the morning, Sprig and Polly learn about what happened and convince Hop Pop to go search for Anne while they go looking for the box. Hop Pop finds Anne's, incredibly obvious, trail as she went to hide in the cave where she stayed before meeting the Plantars. Sprig and Polly head into town and discover that there are holes everywhere with people's items missing. Soggy Joe tells the kids that this is the work of the Magpie Beetle and they head back home to discover a tunnel in the hole where Hop Pop dug. They go inside and discover that the Magpie Beetles are in the middle of a "love-nado dance" and get caught up in it. Hop Pop finally finds Anne and when he tries to explain his reasoning for hiding the box, suddenly hears Sprig and Polly in trouble.

Anne and Hop Pop are forced to work together to save Sprig and Polly from the pit of Magpie Beetles and they manage to pull them out along with the box. Although she relived that Sprig and Polly are safe, Anne decides to leave out of distrust, much to to their sadness. However, Hop Pop reveals the source of his fears as he tells her that a few years ago he was out adventuring when giant herons attacked Wartwood. While Sprig and Polly hid from the attack, their parents were killed (and most likely eaten). Hop Pop blamed himself for not being there with them and has promised to look after the kids (who had continuously assured him that none of this was his fault) ever since while also forbidding any more dangerous adventures. Hearing the truth and seeing him break down apologizing, Anne changed her mind about leaving as she goes to comfort Hop Pop and forgives him before they head back home. Hop Pop reveals the book that told him of the Calamity Box's origin, causing Anne to warn the group that the temple mission will be dangerous. Nevertheless, the Plantars agree to help Anne anyway they can. 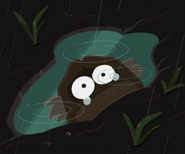