Agatha: Coven of Chaos is an upcoming Disney+ original series, set within the Marvel Cinematic Universe centering on Agatha Harkness. It is a spinoff series of WandaVision, from which the starring character originated.[1]

In October 2021, Variety reported that Marvel Studios were developing a TV series featuring Agatha Harkness, with WandaVision head writer Jac Schaeffer serving as the writer and executive producer on the project.[1]

During the streamer’s Disney Plus Day event on November 12, 2021, Disney+ unveiled the official title for the spinoff series, as well as an official logo.[2]

On July 22, 2022 during San Diego Comic Con, it was revealed that the official title had been moved under a different name, from its original title, Agatha: House of Harkness.[4] 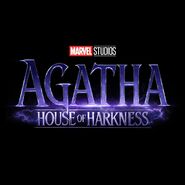