Agent Brainard[1] is a fictional character from the cartoon series American Dragon: Jake Long. He is an agent and recruiter for the Manhattan Genius Institute (also known as M.G.I.). He only appears in the episode "A Befuddled Mind" in Season 2.

Brainard is a tall and muscular man with short brown hair and a goatee. He wears a purple sweater under a black vest and wears a pair of black pants and shoes. He is never seen without his sunglasses.

Due to his profession, Brainard keeps a cool head and remains collected at all times, whatever the situation he's thrown in. He is not even fazed by Spud's less than "genius-like" attitude (although he does seem slightly confused) when he meets him to pass along an invitation to the Manhattan Genius Institute. He always speaks with enthusiasm about the Institute to influence the client into accepting the invitation.

Agent Brainard is tasked by the Manhattan Genius Institute to meet with genius minds all over the Tri-State Area and invite them to join the program. He can meet with newly discovered geniuses very quickly, as seen in "A Befuddled Mind" when he appears mere minutes after Spud's test was scored. While he attempts to persuade the client to enroll in the Institute, another agent sends the paperwork to the student's parents, which halves the procession time of the inscription.

When not hunting for new genius minds, Brainard also acts as a bodyguard. If any of the students discover the truth behind the Institute and attempt to flee, Brainard will block their way and capture them. 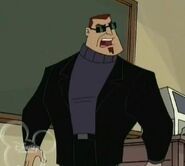 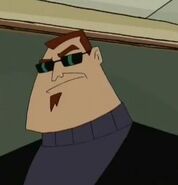 Retrieved from "https://disney.fandom.com/wiki/Agent_Brainard?oldid=3463898"
Community content is available under CC-BY-SA unless otherwise noted.