Start a Wiki
watch 01:27
Disney's 'Aladdin' Teaser Trailer
Do you like this video?

Aladdin is a 2019 American musical fantasy film directed by Guy Ritchie and written by John August. As a live-action adaptation of the 1992 animated film of the same name, the film was released by Walt Disney Pictures on May 24, 2019. The plot follows Aladdin, a street urchin who falls in love with Jasmine, befriends a wish-granting Genie, and battles the wicked Jafar.

Aladdin is a lovable street urchin who meets Princess Jasmine, the beautiful daughter of the sultan of Agrabah. While visiting her exotic palace, Aladdin stumbles upon a magic oil lamp that unleashes a powerful, wisecracking, larger-than-life genie. As Aladdin and the genie start to become friends, they must soon embark on a dangerous mission to stop the evil sorcerer Jafar from overthrowing young Jasmine's kingdom.

In the sultanate of Agrabah lives a kind-hearted thieving street urchin named Aladdin. One day while roaming the streets, Aladdin spots a beautiful girl who gets in trouble after giving away bread to children without paying. Aladdin comes to her rescue, and together they get chased by the Royal Guards. After a while they elude their pursuers, and Aladdin takes the girl to his place for some tea. The girl calls herself Dalia, and is the handmaiden to the Princess of Agrabah. She suddenly has to leave as another suitor for the princess, Prince Anders, arrives. Dalia happens to be Princess Jasmine and Dalia is the name of her handmaid and best friend. Meanwhile, The Sultan's trusted councilor, Jafar, is plotting to overthrown the Sultan by acquiring the Magic Lamp. However, it is hidden in a enchanted Cave of Wonders, and only the "Diamond in the Rough" may enter, which he is not. So, he spends weeks searching for this Diamond in the Rough.

One evening, after turning down Prince Anders' hand in marriage, Jasmine receives a surprise visit from Aladdin, who has come to return her mother's bracelet, which Abu stole. Still thinking she's Dalia, he leaves her with a promise to meet her again, but is caught by the royal guards. The next day, Aladdin finds himself in the desert with Jafar, who assumes that he is the Diamond in the Rough. He tells Aladdin that the girl he met was the princess and that he can make him rich enough to impress her if he helps him retrieve the lamp. By evening, they arrive at the cave, and since Aladdin is the Diamond in the Rough he is permitted to enter the cave safely. The Cave of Wonders is filled with wondrous treasures that tempt both Aladdin and Abu. However, they have been warned to only retrieve the lamp and not to touch any of the other treasures otherwise they would be trapped inside the cave forever. Along the way they meet a Magic Carpet and find the lamp. However, Abu becomes tempted by a big shiny ruby and takes it. This angers the spirit of the cave, and starts to cave in. Aladdin and Abu barely make it back with Carpet's help, but end up trapped in the cave after Jafar takes the lamp and betrays him.

Trapped inside the cave, Abu reveals that he stole the lamp back from Jafar. Aladdin notices the lamp is a bit dusty and gives it a rub. This causes the lamp to release a powerful Genie who can grant him three wishes, as long as he is holding the lamp. Aladdin wishes to escape from the cave (though he makes a wish without holding the lamp, keeping his three wishes intact), and both he, Genie, Abu and Carpet find themselves in the middle of the desert. After seeing Genie's potential, Aladdin wishes to become a prince in the hopes that he can be with Princess Jasmine. Genie transforms him into Prince Ali, and parade to The Sultan's Palace, where the Sultan welcomes him.

Aladdin starts off a bit awkward being a prince and trying to impress Jasmine, especially when Genie has him dance spectacularly in front of the princess. Instead of being impressed she just leaves. Meanwhile, Jafar becomes suspicious of Prince Ali.

Later, Aladdin decides to go to visit Jasmine in her room, while Genie takes Delia out for a late night stroll. By just being himself, Aladdin takes Jasmine on a magic carpet ride, where the two become close. While watching the village people from above, Jasmine figures out that Ali is Aladdin, but he manages to convince her that he is really a prince and that he dresses as a commoner to escape palace life. Then he takes Jasmine back to the palace and they share their first kiss.

The next day however, Jafar captures Aladdin, who has figured out who he really is. He threatens to have him thrown into bay unless he tells him where the lamp is. When Aladdin denies everything, Jafar personally pushes him out of his tower and falls into the sea. Abu and Carpet arrive with the lamp, and Aladdin manages to rub it before drowning. Genie rescues Aladdin, and after speaking with Jasmine they confront the Sultan of Jafar's treachery. Jafar tries to hypnotize the Sultan into thinking they are lying, but Aladdin destroys his staff, proving to the Sultan of Jafar's treachery. He is taken to the dungeon, but manages to escape after Iago brings him the keys.

Meanwhile, the Sultan thanks Aladdin for revealing Jafar's treachery, and would be happy to have him marry his daughter. This makes Aladdin decide not to use his last wish to set Genie free as he promised, as he believes he cannot keep up being a prince without him. Genie is disappointed that Aladdin wants to continue living a lie and retreats to his lamp. Aladdin goes back to his old home in deep thought, and comes to see that Genie is right. He needs to tell Jasmine the truth. Just then, he realizes the lamp is gone and is now in Jafar's possession.

Jafar wishes to become sultan, but when the guards refuse to obey him he uses his second wish to become a sorcerer. He banishes Aladdin to the ends of the earth and threatens to kill Dalia and the Sultan unless Jasmine agrees to marry him. However, Genie sends Carpet to find Aladdin and Abu.

As they proceed with the wedding ceremony, Jasmine notices Aladdin coming on carpet. She plays along with the wedding and once she gets close enough to Jafar, she swipes the lamp from him and jumps onto carpet. Jafar sends Iago after them, turning him into a giant parrot. They almost lose the lamp during the chase, but get it back. However, Iago steals it back, but then loses it when the Sultan interrupts Jafar's sorcery on him. He changes back into a regular parrot. However, Jafar then casts a sand twister that capture Aladdin and Jasmine and brings them back to him. Jafar now has them at his mercy, declaring him the most powerful man in the world. However, Aladdin retorts by claiming Jafar is not as powerful as he wishes to believe. The Genie remains the most powerful being in the universe as he gave Jafar his power in the first place and can also take it away. Realizing what Aladdin says is true and that he is still just "second-best", Jafar uses his final wish to become an all-powerful being. Seeing Aladdin's cunning plan, Genie grants his wish, turning Jafar into a monstrously powerful genie. With phenomenal, cosmic power at his command, Jafar declares himself ruler of the universe, while he plans to use his newly-obtained powers to destroy Shirabad. However, as pointed out by Aladdin, the power of a genie comes with a price. Jafar receives his own golden shackles and a lamp prison, which sucks him inside along with Iago.

Foiled and trapped by his own greed, Jafar's magic over Agrabah is undone. As for Jafar's Lamp, Genie sends it flying to the Cave of Wonders, where the bickering Jafar and Iago would be forced to remain, as prisoners, for many years. Aladdin apologizes to Jasmine and the Sultan for deceiving them, and is just about to leave until Genie reminds him that he has one wish left to make himself a prince again or erase the law of a prince marrying a princess. However, Aladdin decides to use last wish to set Genie free. Genie decides to spend his freedom seeing the world with Dalia, who he has fallen in love with, and have 2 children together.

The Sultan has decided to pass his crown onto Jasmine, making her the Sultan of Agrabah. Meanwhile, Aladdin sneaks away unnoticed, still thinking he is not right for Jasmine. However, she catches up with him and the two embrace and later marry.

On October 10, 2016, Deadline.com reported that Disney was developing a live-action remake of Aladdin with Guy Ritchie in talks to direct the film. John August is writing the script that will reportedly retain the musical elements of the original film while Dan Lin is attached as producer.[1]

In March 9, 2017, announced the start of the casting of the protagonists (Aladdin and Princess Jasmine). Lin revealed that they are looking for a diverse cast.[2][3]

In August 2017, Guy Ritchie revealed that he wanted Tom Hardy to take the role of Jafar.[6][7]

Later that month, Alan Menken revealed that he will return to compose the music (he also composed music in the original film).[8]

Production on the film was slated to begin in July of 2017. However, on July 11, 2017, it was reported that production on the film would be delayed to August, due to difficulties in finding suitable actors and actresses to portray the leads, Aladdin and Jasmine. Both actors are required to sing, dance, and be of either Middle Eastern or Indian descent. It has also been stated that the studio would prefer newcomers and unknown talents for the two lead roles. Around 2,000 auditions for Aladdin and Jasmine have taken place in London, Egypt, Abu Dhabi, and India, and despite the global search, Disney has not been satisfied with the results.[9] The same report claims that actor Will Smith is "locked" to voice the Genie, while Disney is looking to cast a "big name actor" for the role of Jafar.[9]

At the 2017 D23 Expo, the main cast was announced, including the confirmation of Will Smith as Genie, Mena Massoud as Aladdin, and Naomi Scott as Jasmine.

After composing the music for the original film of the same name, Alan Menken composed the score for the live-action remake with Benj Pasek and Justin Paul writing a new song called Speechless. Several songs from the original film written by Menken, Howard Ashman, and Tim Rice were featured in the remake.

Aladdin was digitally released by Walt Disney Studios Home Entertainment on August 27, 2019 and September 10 on DVD, Blu-ray, and 4K Ultra HD Blu-ray. The film will be available during the first year of launch on Disney+.

On review aggregator website Rotten Tomatoes, the film holds an approval rating of 57% based on 351 reviews, and an average rating of 5.92/10. The site's critical consensus reads, "Aladdin retells its classic source material's story with sufficient spectacle and skill, even if it never approaches the dazzling splendor of the animated original."

Differences from the 1992 film

The Disney Wiki has a collection of images and media related to Aladdin (2019 film). 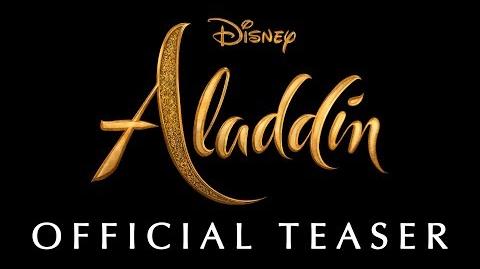 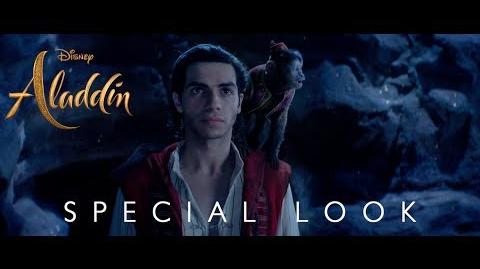 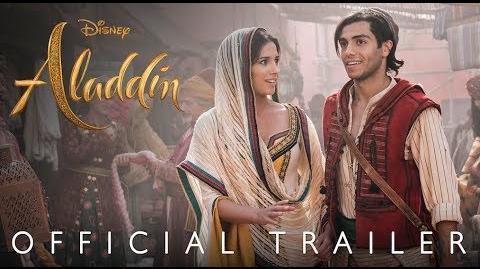 Disney's Aladdin - "I Wish to Become a Prince" Film Clip

ALADDIN "Genie" Will Smith Behind The Scenes Interview