Alan Cumming, OBE, is a Scottish-American actor and comedian who is best known for appearing in numerous films, television shows, plays, and musicals. Some of his stage appearances include Hamlet, Accidental Death of an Anarchist, Bent, The Bacchae, The Threepenny Opera, Cabaret, and Design for Living. He is also well-known for his roles as Eli Gold on the CBS legal and political drama series, The Good Wife, from 2009 to 2016, Fegan Floop in the Spy Kids film series, Loki in Son of the Mask, and for voicing Sir Roland/Persnikitty in Garfield: The Movie and Gutsy Smurf in the live-action Smurfs films. He currently plays Dr. Dylan Reinhart on the CBS crime drama series, Instinct.

For Disney, he voiced the Bog King in Strange Magic, John Castaway in the Gargoyles episode The Journey and portrayed Sandy Frink in the 1997 comedy film, Romy and Michele's High School Reunion, Rooster Hannigan in the 1999 comedy film, Annie, and the Magician in the park attraction CinéMagique. 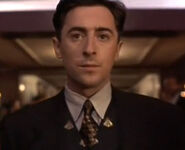 Bog King
(Strange Magic)
Add a photo to this gallery